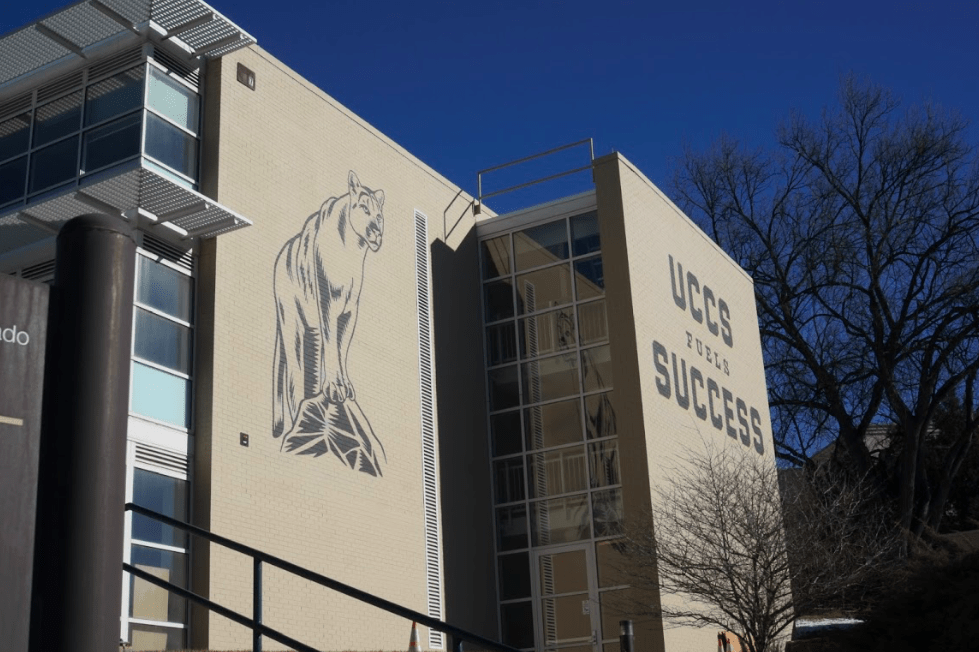 The newest addition to the “UCCS Fuels Success” marketing campaign is a mural on the south facing wall of Cragmor Hall by local artist Steve Beach.

The mural depicts a black mountain lion graphic and the campaign name “UCCS Fuels Success.” The hand painted graphics took four days to complete and was finished on Dec. 17. The mural pairs with several other new murals inside of the Cragmor Welcome Center and banners throughout the campus.

Approval of the mural required collaboration from staff in several departments.

Chancellor Venkat Reddy listed the departments who participated in the work behind the mural.

“Since there are so many people impacted by a mural such as this, as well as the overall campaign, there were many people and groups who weighed in,” said Reddy via email. “Everyone from the Chancellor’s Office, Facility Services, Enrollment Management, Admissions and others were involved in planning and approving the work.”

Student opinion also played a role in the final decision along with that of surrounding community groups.

“Moreover, current and prospective student groups, alumni, faculty and staff all helped determine the direction of the new look of the campaign,” said Reddy. “When we did our testing, prospective students overwhelmingly chose this concept as their favorite.”

“It’s a huge statement,” said Gonzalez.“I’m excited about all the school spirit.”

Chancellor Reddy agrees that the mural seems to be well liked on campus.

“We have received great feedback from students, prospective students, faculty and staff already. We are excited for more people to view the mural once the new semester begins,” he said.

“UCCS Fuels Success” was first adopted by UCCS on Sept. 17, and has since included both on campus and community wide advertisements. The campaign was developed under UCCS’ partnership with the marketing firm Karsh Hagan.

The campaign is a celebration of the UCCS experience, and attempts to pay homage to students. On Oct. 1 the first “UCCS Fuels Success” television commercial was released, and since then six more commercials were produced in addition to several billboards, social media and print advertisements.

“UCCS Fuels Success” was recently recognized with a Case Gold Award from the Council for Advancement and Support of Education (CASE) at the District 6 Regional Conference this month for its commercials and public service announcements.

“It is based on the pillars of exceptionally serious and driven students who want a degree that works as hard as they do. It celebrates the fact that UCCS offers the distinction of a University of Colorado degree plus the unique UCCS experience: one-on-one support from exceptional professors, community ties that open doors and a commitment to preparing our graduates for real-world achievement,” said Reddy.

This semester, students can expect to see more of the campaign designs and initiatives on campus.

There are big plans in the future for “UCCS Fuels Success.” At this time, the university is exploring other outdoor marketing options, such as the outside of other buildings on campus.

“More colleges and departments are eager to adopt some of the new campaign looks in their own marketing and advertising, so we will be providing training and resources to support a broader campus rollout of the campaign,” said Reddy. “Everyone seems very excited about it!”