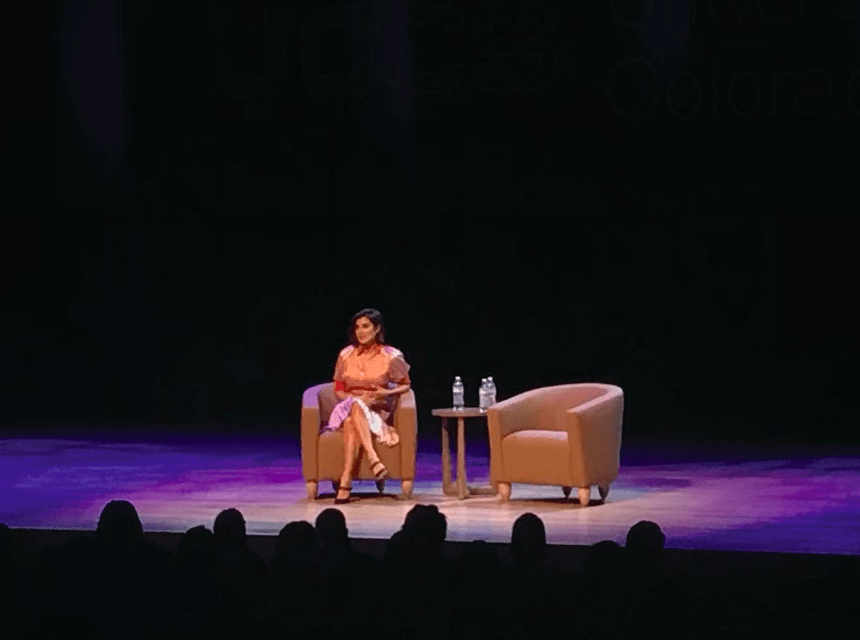 By: Joy Webb
In: News, Uncategorized

A crowd of 650 students, faculty, staff and community members gathered on April 11 to hear Diane Guerrero share her experiences as an actress, an author and an activist.

“You are human, and I am human, and your struggle is my struggle. We can find some common ground. Don’t be afraid to feel these things and want to believe these things. There has to be a point where we care about human life more than ourselves,” she said.

Guerrero is best known for her portrayal of Maritza Ramos in “Orange is the New Black.” However, she has also penned her experience as the child of immigrants, who were deported when she was 14 years old.

Guerrero spoke about her personal experiences, gave advice and advocated for topics such as immigration reform. Andrea Herrera, associate vice chancellor for inclusion and academic affairs, moderated a 45-minute Q&A with the actress. The event was held at the Ent Center for the Arts in the Shockley-Zalabak Theater.

Priscilla Perez, an English major at UCCS, introduced Guerrero, explaining how she was a daughter of two immigrants and a first-generation college student.

“I identify with Diane Guerrero because we are both strong women,” said Perez.

Guerrero spoke about her work, her past and what she has in store for the future. Although her career started with her role on “Orange is the New Black,” Guerrero has plans to continue her activism and possibly get involved in politics, since she has a degree in political science.

Guerrero also  spoke about being separated from her family at a young age and how this is reflected in her book, “In the Country I Love, My Family Divided.”

Guerrero believes in taking back pain and trauma with words, and using her past to make a difference and see a change.

“This therapist asked me what I wanted to do, what made me happiest. I said I was happiest when I was an artist, that’s when I felt smart, in control and able to connect. She suggested taking acting classes,” said Guerrero.

Guerrero used acting as an outlet for expression, and become more connected with herself.

Student questions followed Herrera’s Q&A. Questions included her acting career, turning down roles that portrayed her as a “typical Latina” and how she handled being separated from her family.

“I always felt like I couldn’t feel bad for myself, because I thought my family was experiencing much worse, but I’ve learned that I shouldn’t have ignored my pain. Once again art was my savior, it let me feel like I could feel,” she said.

“You care so much about so many things. I think I realize that I was getting overwhelmed; you see the most qualified people not being able to tackle these things that plague our world,” she said.

“What I realized is that just take it one step at a time, if you’re leading with love and do what you can, you’re gonna be okay.”