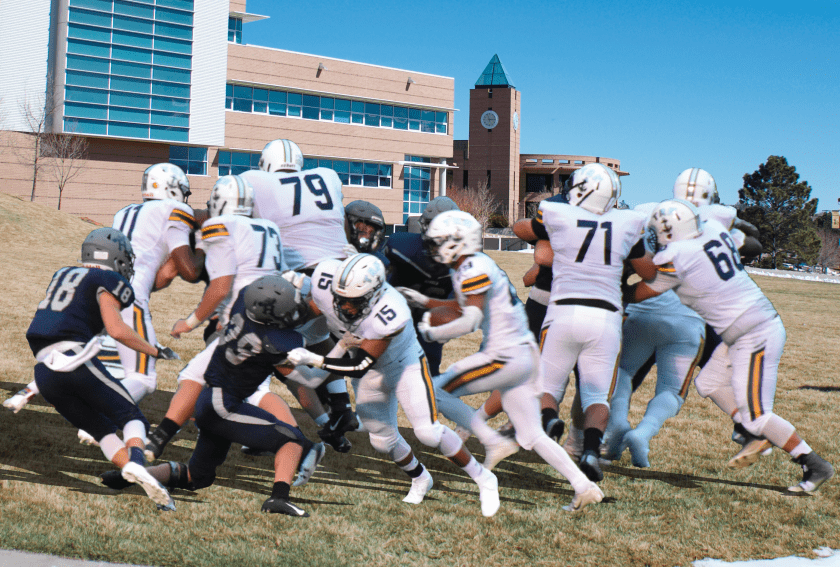 Division I football team to be added to athletic program

By: Lyne Bakker
In: Sports & Recreation, The Scribble

Football has never been a part of the culture at UCCS. But starting in August, that is going to change. According to an announcement by Athletic Director John Elways, a Division I football program will have its inaugural season next fall.

According to Elways, “the UCCS Athletics program realized that there was something missing from the university and believes that the addition of a football team will help increase student involvement on campus as well as bring in more incoming freshmen each year.”

The team will be made up of athletes from all over the world, with their star player and quarterback being James Carson from the University of Salzburg in Austria. Although Carson only played European football back home, also known as soccer in America, he feels confident in his abilities to lead the team as their starting quarterback.

The team’s kicker, Robert Jones, was also a European football player at Oxford University. Jones believes that his experience playing football at Oxford will benefit the team and vows to keep a perfect record this season by never missing a field goal.

Another star player that will be joining the Mountain Lions next year is running back Jason Cook, who will be transferring from CU Boulder. Cook said he is excited for the opportunity to play for UCCS after being benched all of last season.

“I’m ready to go out there and show the country who I am,” said Cook . “I’ve been training my whole life for this and now I have the opportunity to lead a team to victory.”

Their new head coach will be George Forbs, who has been the special teams coach for the University of Florida’s football team for the last five years. According to Forbs, “The high altitude and unusual training environment will help set the team apart and give them an extra edge over other teams.”

Although this will be the team’s first year, Forbs is hopeful for the their success and warns other teams that UCCS will be a force to reckon with this upcoming season.

Because of the teams unique training environment, all of the games for this coming season will be away games, and it is unclear if UCCS will be building a stadium in the future. In order to compensate for the lack of home games and bring in as much fan support as possible, the UCCS Department of Transportation will be providing shuttles to and from all games against Colorado teams including CU Boulder, Colorado State University, University of Northern Colorado and the US Air Force Academy.

UCCS is scheduled to have their first game this August against the California Golden Bears at the University of California, Berkeley.

Anyone interested in learning more about UCCS football can reach out to [email protected].