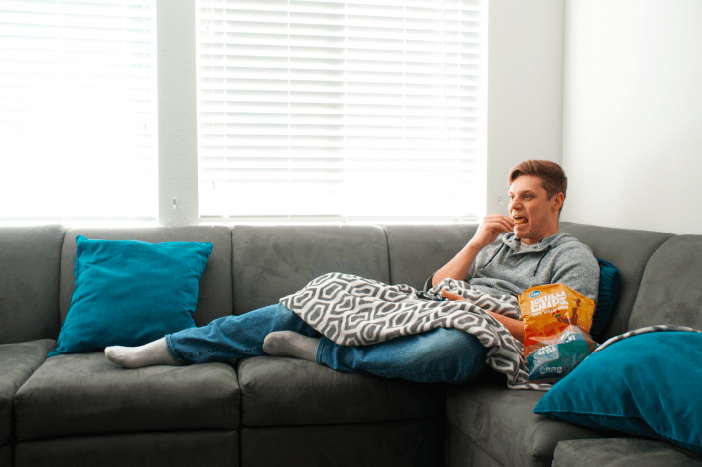 By: Action Jackson
In: Sports & Recreation, The Scribble

After training for two straight years, Scooter McGruder has now won five consecutive couch potato competitions as an amateur competitor in the past six months.

“I never imagined being this good at being a couch potato,” said McGruder. “All of my training definitely paid off.”

McGruder says that every day after school he would quickly finish his homework and then head to the family room to play video games and watch television until dinner. After dinner, the routine began all over again.

Charles McGruder, Scooter’s father, had this to say about his son:

“I always felt as if Scooter enjoyed sitting on the couch way too much. I’m very glad that what I thought was a bad habit turned into a profession that Scooter enjoys.”

Scooter’s mother, Angela, said that she wished her son would have chosen a different profession. “It’s taken me a while to finally come around to what Scooter is doing with his life. I didn’t like it at first but now I’m just happy for my baby boy.”

In order to train, McGruder spends about 18 hours on average on his couch. The only time he gets up from his couch is for bathroom breaks, to cook meals and to go on his mandatory regulated hour-long walk.

“I didn’t really enjoy the walks at first,” said McGruder. “But the doctor said if I don’t go on a walk every day, my legs will start to lose blood flow from sitting so much. It’s really been a blessing in disguise for my training.”

In order to fully accommodate his intense training regiment, the McGruder family purchased a custom-made couch for Scooter which perfectly fits the mold of his body. This new couch allows for Scooter to stay fully seated for a maximum of 20 hours, if he wanted.

“When he won the first competition, I thought ‘Oh, it’s just beginner’s luck,’” said Charles. “But then he kept winning and winning. After the fourth competition, I knew that it was getting serious and we needed to start considering what this meant for Scooter’s future.”

Each competition that the younger McGruder has entered involves five consecutive hours of playing video games followed by a four hour-long nap. After a three-minute bathroom break, the competition concludes with eight straight hours of watching a TV show of your choosing.

McGruder has traveled to Florida, Mississippi, Nebraska and Illinois to compete in these competitions. His latest competition that he competed in took place in Southern California.

“I’ve really enjoyed being able to travel to all these different places around the United States,” said McGruder. “My next competition is going to be in Canada this summer, so I’m really excited for that.”

Because the next competition that McGruder is competing in is international, the competition’s rules are different.

International competitions involve an extra segment where competitors must spend at least two hours on their phone. It can be done at any time for any amount during the competition, but the two hours must be completed by the end of the competition.

“I’m really nervous about how the competition will go, but I have a great trainer and I still have a lot of time to prepare.”

2019-04-02
Previous Post: Blizzard traps students on campus and on the way home
Next Post: Division I football team to be added to athletic program