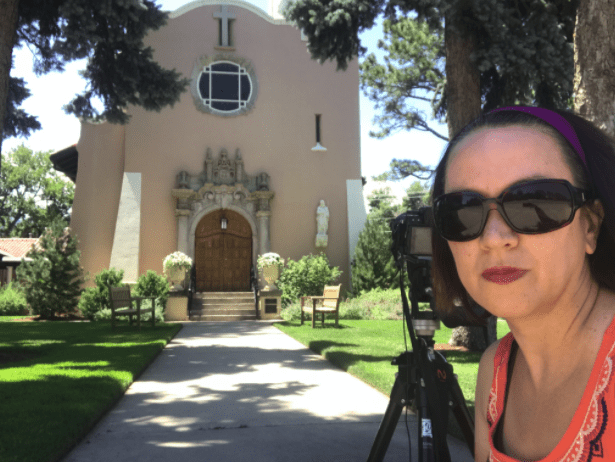 ‘Exvangelicalism’ found in the facades of Colorado Springs churches

Stacy Platt, visual arts and art history professor at UCCS, is reshaping the sights of Colorado Springs with her current project: #exvangelical.

If you were to search the hashtag exvangelical, you would find thousands of posts cataloging trauma and pain caused by evangelical Christianity. Stories range from the horrors of the purity movement to jokes about hell to memes about the absurdity of the doublespeak found in churches. And the people making these posts range from atheists to Christians. All of this merely scratches the surfaces of what it means to be exvangelical.

“Exvangelical” is a term that has arisen in recent years to describe anyone that has left evangelical Christianity — a version of Christianity that has become heavily connected and identified with the GOP, especially Trumpism — a term that Platt finds herself identifying by.

Unlike the recent exodus from evangelicalism due to conservative politics, Platt was ahead of the curve, when at the early age of 12, she knew this religion was not for her.

“People were spontaneously going up to the podium or whatever where the preachers and elders were to rededicate themselves to Christ,” Platt said. “And I had this thought where if everyone in this room is right then everyone else in the world is wrong. And do I believe that? And I was like, I don’t.”

Platt grew up evangelical; in fact, she grew up here in Colorado Springs, a city often referred to as the evangelical Mecca of the United States. Platt did not think she would ever return to Colorado Springs. But when a job opportunity for her husband at Colorado College brought her back to the city of her youth, she decided to make the most of it.

“I have to deal with what I have, where I’m at, and I’m in Colorado Springs, and I could hate on that or I can work with it,” Platt said, and she did.

Inspired by Andrew Shea, three years ago Platt decided to start photographing every church in Colorado Springs. Korean churches, mega churches, store front churches, Catholic churches. They all find a space in #exvangelical; after all, that only makes sense in a city that houses over 400 churches.

But it’s not just about the topology of church architecture, it’s also about the stories that are paired with these religious facades.

“One of the largest bouts of anger happened while my mother was dying of brain cancer,” read the text with the simple initials K.S. “[M]y mother felt guilty for dying, as it wasn’t god’s plan. I wanted to wring [the preacher’s] neck. I was angry with them all for continuing the farce.”

The project is filled with these beautifully haunting images and equally haunting stories, stories that give voice to a demographic that is often silenced.

“The evangelical movement … is very push and loud and takes up a lot of space. And the voices of people who have left these communities, often at a great personal cost,” Platt said. “I like the idea of providing a place where people can tell their stories and they can find that there’s community there. I like tying it to something physical, an actual structure of the church.”

As a queer person that grew up in the church, I experienced this. I went to Bible school, was a youth pastor, a missionary. Then I came out, and it was all gone. Everything I invested in since I was born vanished.

But I’m not the only one. Most of my friends are now exvangelicals, and that journey was so hard for most of them. Left alone. Without community. Family ashamed of them.

When I see Platt’s images and read her stories, I see the faces of my friends and the pain they’ve endured over the years because of evangelicalism. That’s why Platt’s work is truly so powerful, especially in a place like Colorado Springs.

While Platt has been working on the project for over three years, she’s far from done. She often takes a break from the project during the school year, only working on it during the summer. She’s still thinking through the final form, wanting to ensure that form matches the content in the most nuanced and appropriate way.

She presented the work at the Ent Center last year.

In the meantime, you can see what she has so far of the project at stacyplatt.com/the-exvangelicals.

2021-03-01
Previous Post: These 4 zodiac signs will have the best March 2021
Next Post: Return of study abroad programs at UCCS depends on COVID-19 restrictions