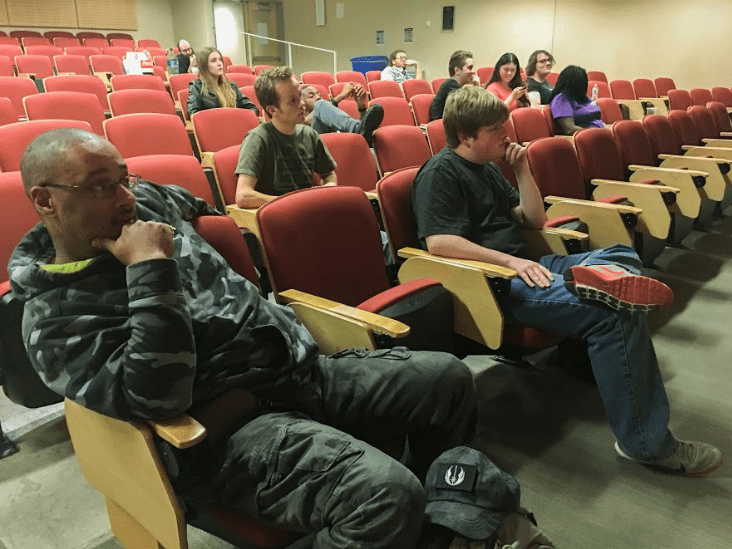 By: Halle Thornton
In: Culture

Eating popcorn while watching a film you’ve wanted to see for the last six months is fun, but enjoying a film that you made with your peers might just be even more rewarding.

The film club is looking to integrate more filmmaking opportunities within the club meetings, which happen Thursdays at 7:30 p.m. in Dwire 121, and merge with students of all majors to encourage collaboration across film enthusiasts.

Five officers are currently a part of the club, but this number fluctuates depending upon whether or not the club is actively working on a project.

Mitchell began to implement changes in the club’s infrastructure after leading the group for a year. This year, Mitchell’s focus has been on integrating a filmmaking aspect to the club.

A DIY filmmaking workshop has been created to teach students filmmaking techniques. Students will learn technical aspects as part of how to shoot them properly. All students are welcome to attend these workshops.

“A lot of people come to us for connections and equipment,” said Mitchell.

The club crosses over into the Digital Filmmaking track, which is a part of the Communication Department, along with the VAPA Department. Mitchell would like to see more of that crossover in years to come.

But Mitchell’s main mission is to create a place where any student, regardless of their experience, can learn about film and the filmmaking process.

“My primary concern is making sure there’s an inclusive and safe space for students to express themselves through film, from varying degrees of experience,” she said.

The club faced challenges with attendance last year, according to Katie Hermanson. Because of the collaboration between officers in terms of problem solving, attendance has improved.

“We got new officers and really focused on marketing and getting the word out more,” said Hermanson, a junior film and psychology major.

“My favorite part of the club is the members and the people that show up who genuinely enjoy watching films. The people are open, friendly and honest with each other.”

The club spends most of their time watching movies and discussing film basics. At one meeting, club members watched “Breakfast at Tiffany’s” and discussed fashion, whether the film is considered a classic and the elements of race found in the movie, said Mitchell.

The club also holds film screenings where they show avant-garde productions such as “Cabinet of Dr. Calagari,” a German expressionist film.

Mitchell added that the club also holds the annual film festival, which they have hosted for seventeen years. The film will be in early May this year.

This year’s festival will have to be relocated from Dwire 121 due to the number of people in attendance last year, according to Mitchell.

Preparation for the festival begins in mid-April, and submissions are also accepted then. Mitchell said that last year, the club had to cut submissions down because there were so many.

“We’ve been seeing a lot of expansion in the UCCS film community in particular. It’s really exciting,” said Mitchell.