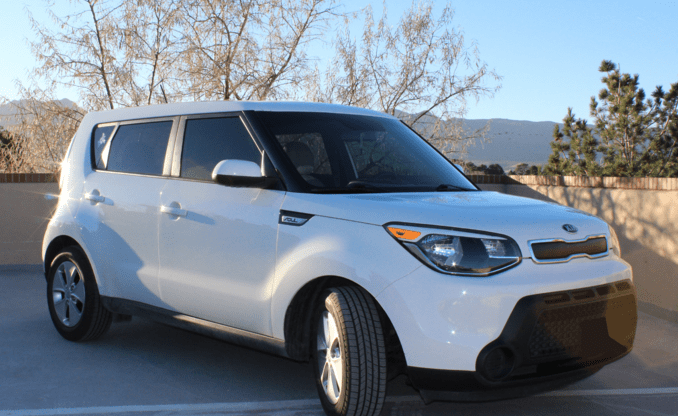 By: Kate Marlett
In: Features

For a school with as many commuters as UCCS, cars can be a big deal. A student’s car is somewhere they will spend a lot of time, and certain aspects may be more important than others in determining the best fit.

Having a reliable car is important, especially for UCCS students commuting from across the city. Knowing that your car will carry you from one place to another is important, and not something that every car can offer.

According to Kelly Blue Book, the Toyota Corolla rates as one of the most reliable cars and comes with a high rating with the IIHS. While new Corollas start at $20K, used Corollas can be found much cheaper from dealerships or used car sites such as AutoTempest.com.

The Corolla is compact enough to park in the “Compact Cars Only” spots in the parking garages, and with Toyota Sense 2.0, safety is something that you will find in this car. KBB gives the Corolla a 4.4 overall rating, its highest on the list of best cars for college students.

While the Soul may be known for its hamster commercials using songs like “Party Rock Anthem” or “Applause,” it is a vehicle capable of so much more than simply listening to good music. I may be a little biased, as I am the proud owner of a Soul, but the newest model year made one of the IIHS’ top safety picks, with a superior rating in multiple categories.

The Soul balances gas mileage, safety and reliability all with one important bonus: space. While it may not be something you’d expect from a compact car, I have been known to fit Costco purchases for two families at once, with room to spare.

According to Car and Driver, “While it’s true that the Soul looks like nothing else on the road, its boxy body hides a particularly practical cabin, with plenty of room for both people and cargo despite its small footprint.”

With its average MPG of 29 city/35 highway, it’s not a bad choice if you’re looking for a daily driver. The Soul is a fun combination of funky and functional and may be the right fit for you.

A lot can happen on the road between home and school, and it can be wise to invest in a car that will get you there and back safely. For years, Subaru has advertised their superior safety ratings as one of their many selling points.

Each Subaru also comes with EyeSight Driver Assist Technology, technology which has earned the Subaru Crosstrek the highest possible rating for front crash prevention by the IIHS. According to Subaru’s website, EyeSight monitors traffic movement, optimizing cruise control while keeping you in your lane.

Coming in with the winner of the price category is the Honda Civic. For generations, Civics have aged well and run without high maintenance costs. Previous generations of Civics stay true to this standard, offering a trustworthy choice, even on the used market.

The U.S. News and World Report gives the Civic a top rating in the compact car category. Throughout its history, Civics have had a history of being easily maintained while being functional — all at an affordable price. There are many great options for Civics under $10Konline at AutoTempest.com.

The Honda Civic is a staple of the car market, from its recognizable design to its affordable price. Going to college is expensive, and it’s nice to have a car that isn’t.

Let’s be real: No other vehicle has the same spirit of adventure that you get in a Jeep Wrangler. For decades, the iconic body style and signature front grill design have been a favorite to those exploring rugged trails, working on farms or simply enjoying the outdoors.

Whether you are utilizing one of Colorado Springs’ many off-roading trails or simply want something that you know will carry you anywhere you want to go, the Wrangler may be for you.

Spending a weekend off-roading near Cripple Creek taught me that Jeeps are built for the outdoors, something that Colorado is proud of. The Wrangler has won an array of awards for its capable nature, from the 2022 Four-Wheeler SUV of the Year to the Women’s World Car of the Year.

While the Jeep Wrangler may not make it on the top list for its reliability, with a score from EchoPark that places it 15th out of 32 car brands, I, for one, believe that Jeeps put the “fun” in “functionality.” It’s not something every car has.