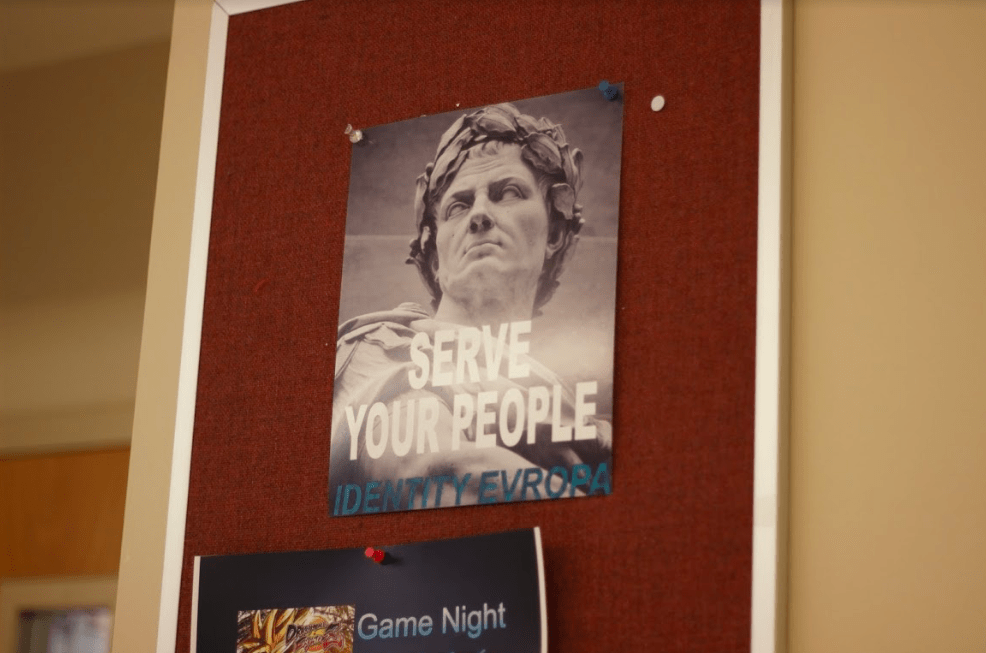 One of the two varieties of posters called for readers to “Serve your people,” with a prominent picture of a Julius Caesar bust. The other poster sported a  message, saying, “Our Generation, Our Future, Our Last Chance,” with a link to the group’s website.

The flyers were found hanging from university-sponsored bulletin boards, they were not approved by the University Center Help Desk, according to Jan Castro, employee of the UCCS Help Desk.

“They haven’t been approved by us or anything,” said Castro. The the building manager was the only person allowed to take down the posters.

Flyers that hang from university-sponsored bulletin boards must be approved by the university through either the help desk or through the copy center. Approved flyers will have a mark in the corner of a paw print.

Identity Evropa has the mission and goal of creating a nation to serve white people above all others. On their website, large banner images depict protests with banners reading “America First.”

Their website repeatedly references to a common identity among people of European descent, their press releases endorsee racial segregation, and their membership applications specifically mention that applicants must be of “European, non-Semitic heritage,” which reflect neo-Nazi beliefs and actions.

Most of the flyers were found in and around Columbine Hall. One flyer was found outside of the exit of the University Center nearest the MOSAIC office, the organization which promotes multicultural and LGBT inclusion, something which white nationalist groups like Identity Evropa oppose.

Jesse Perez, assistant director of MOSAIC and the program manager of the LGBT+ Resource Center, said that the materials posted by the group did make many of the students MOSAIC supports uncomfortable and unsafe.

“I encourage students who have been impacted by this to connect with our office so that we can provide support and resources,” said Perez in an email.

“I find these materials offensive as well, and we’re working with different offices across campus to monitor and address the situation.”

According to the Identity Evropa Twitter account, the group hung posters on bulletin boards in CU Boulder on Feb. 19, and at other universities along the entire Front Range through the last couple of weeks.

These recent events fall in line with a tactic dubbed “Project Siege,” which, according to an FBI report on the group, is to “post provocative flyers around campuses and draw media attention to cover their actions.”

The report goes on to explain that the group’s founder, Nathan Damigo, has gained significant experience in garnering media coverage.

“Damigo’s campaigns tended to focus on perceived anti-white sentiments, and prejudices being instilled and perpetuated on college campuses,” the report continues.

Colorado Springs Anti-Fascists, a local group that organizes against fascist groups, groups associated with white supremacy or white identitarian movements, stated through Twitter that Identity Evropa’s potential for violence should not be ignored.

“Nathan Damigo, one of (Identity Evropa)’s founding members, is the guy who punched a woman in Berkeley and as the earlier article notes they are disrupting classes at (University of California, San Diego).”

Most of the flyers were removed from display within a day and there have been no other comments or activity from Identity Evropa in Colorado Springs.