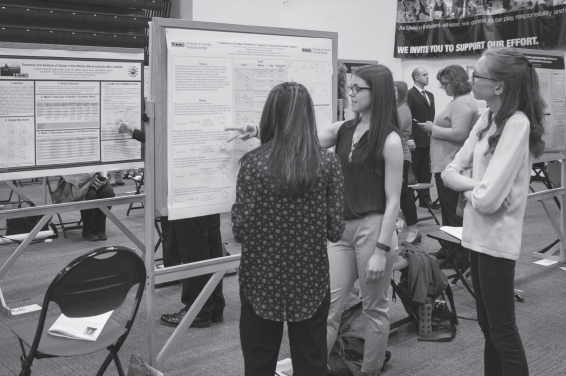 You’ve read the research studies in your classes and perhaps even analyzed their parts and pieces. But some students will step into the role as researcher themselves.

UCCS graduate students had the opportunity to showcase their research findings at the Graduate Student Research Showcase in the Gallogly Events Center on May 3.

Students exhibited their projects on posters they prepared with their partners at the event, which was the first of its kind at UCCS.

At UCCS, graduate students have the option to write a thesis or partake in an extensive research project as they work to obtain their advanced degree.

The showcase highlighted research from graduate students who did not compose a thesis, according to showcase participant Arielle Glembocki, a graduate student who has been studying social media in small business for the last two years.

Like Glembocki, many graduate students, some of who had worked on their projects since last spring, shared their research with the rest of the campus at the event.

Kayla Crosbie, a history graduate student, wrote a research essay on the role of women in the Crusades, focusing on prostitution.

“My goal was to challenge non-historians to look at prostitution through a different lens and not just the black and white,” said Crosbie, who has been working on the project since the fall 2016 semester.

Sarah Kaka and Katrina Cathcart, doctorate students in the Educational Leadership Program, recently had their work published in the Research in Higher Education Journal, a journal that publishes original K-12 manuscripts.

Kaka and Cathcart’s research examined the differences between women who were and were not admitted into the Flying Solo Scholarship program, which grants money for single parents in college.

They found that women who received the scholarship were much more likely to persist in college and to maintain a higher GPA than those who did not.

The goal of their research was to encourage knowledge of scholarship programs like Flying Solo, according to Kaka and Cathcart. Kaka said that she has learned a lot in the process of researching.

“It’s hands-on. You learn how to formulate research questions and how to do every step of the process,” she said.

“We just want to get the message out. It’s incredibly meaningful,” said Cathcart.

According to Flores, there was a significant difference found between genders and ages. Through his research, he found that patrol officers’ fitness levels tend to decline as they grow older, though the demands of their jobs do not.

“Officers need to maintain an exercise routine,” he said. He hopes his project will encourage more research to be conducted.

For graduate students looking to become involved in an extensive research project, contact a professor in your field of study or email Kelli Klebe, associate vice chancellor for Research and Faculty Development at [email protected]

2017-05-08
Previous Post: Volunteer your time, opportunities for students
Next Post: Go to events outside of your own interests, further your college perspective