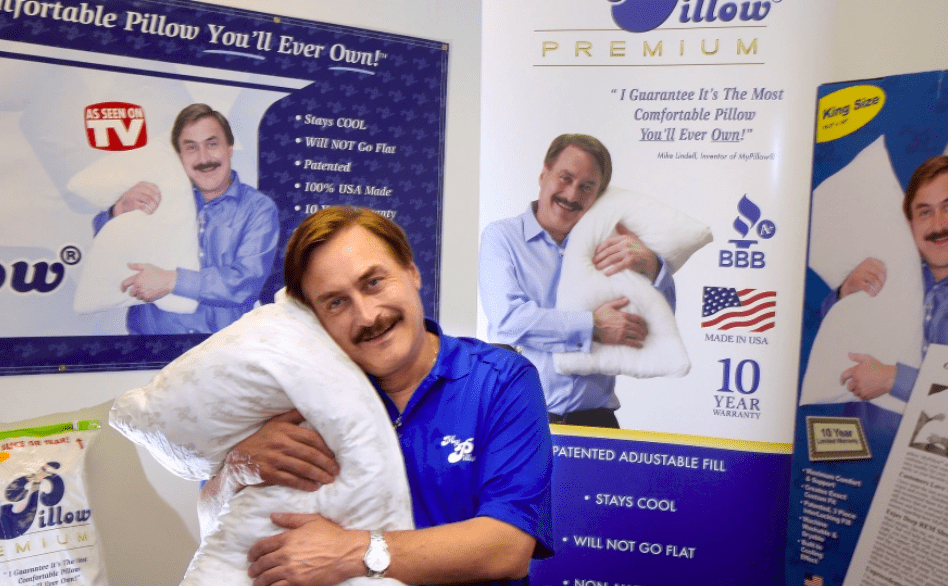 I tried MyPillow, so you don’t have to

“[O]ne-night Mike had a dream; in it was the idea of inventing his own pillow,” reads the MyPillow website, created in 2004 by Mike Lindell.

Before becoming a prominent conservative Christian spokesperson for Trump, one who still actively promotes unproven claims of election fraud, Lindell was known for selling pillows.

I still remember his infomercials. One of his earliest commercials featured a man walking into his bathroom in the morning, after an unrestful night of sleep. He proceeds to open his medicine cabinet to find Mike standing and smiling on the other side, like a perverted clown in a horror movie.

Never would I have thought that I would one day be sleeping on this man’s pillow, nor did I think I would ever be writing a MyPillow review.

About two weeks ago, my aunt bought my father — an avid Trump supporter — two authentic MyPillow pillows. Finding no need for two, my father bestowed his other Lindell dream-made-real on me.

With my newfound sense of curiosity and boredom, I decided to try it for one week, judging for myself what this prophetic pillow really had to offer — memes, jokes and politics aside.

For the record, my current pillows are memory foam and have served me well for the past half decade. I got one on sale at JCPenney and the other from Costco, both well under $40. Besides providing comfort, these pillows have helped me to correct my posture and alleviate pain in my neck.

The MyPillow pillow proved to be quite the opposite of my current pillows.

My king-sized, white MyPillow pillow was $80 (apparently you can get one for $34.98 with a promo code, but I have yet to find that code anywhere) and not memory foam, something that surprised me, considering the price.

The pillow was medium filled, so I expected something semi-firm at the least, but it wasn’t. It was a bit softer than a medium, and so my head sank quite a bit when I laid on it.

Even with the sink, I found my head being abnormally elevated. My head felt quite high compared to the rest of my body, and it made for a strange sleeping pose.

Imagine laying in corpse pose, flat on your back, and then imagine looking at your toes from this position, but by only moving your neck — a lazy man’s sit-up pose of sorts.

The outer lining of the MyPillow pillow was nice and soft, but the insides felt a bit strange. I could feel the innards of the pillow when I lay down, and I heard them jostle every time I moved or changed sleep positions.

The first night was a disaster. I woke up countless times, desperate to find a comfortable sleeping position.

Sleeping on my back was too uncomfortable for my neck, so I tried sleeping on my sides. This effort proved to be in vain since half of my face was engulfed from the sink of the pillow, and all I could smell was detergent. It was nice, but not what I wanted from sleeping on my side.

After an unruly night of sleep, I woke to find my neck stiff, feeling more tired than when I went to sleep.

It was easier to fall asleep after each subsequent night, but it wasn’t because it got more comfortable; I had just gotten used to it.

I slept on my back every night that I was on the MyPillow pillow, and in the morning, I was met with a stiff and strained neck. I would fall asleep on my back, in the lazy-sit-up position, and I would wake up in the exact same position.

By the second night, I noticed that the pillow already had a massive crater where my head was. I was forced to fluff the pillow after each slumber, something I didn’t even think about doing with my memory foam pillows.

Sleeping on the MyPillow pillow was a daunting task that became something that I dreaded each night. For an $80 pillow, it was not worth the price in any capacity. I got mine for free, and it still wasn’t worth it.

Besides showing support for Lindell, and thereby Trump, I don’t see why people would want to buy it. For the money you are spending and the quality you are getting, it really feels like a rip off.

In all honesty, it doesn’t even compare to a regular non-memory foam pillow; I’ve slept on more comfortable pillows in hotels.

On the positive side, the MyPillow pillow was made in America.

But even with this minutely positive trait, it is clear from my experience that this pillow is not worth your time or money. It is an uncomfortable pillow hidden behind a cult personality.

If you really love Trump enough to buy a MyPillow pillow, then just donate to him and avoid getting the pillow. Save yourself the neck pain.