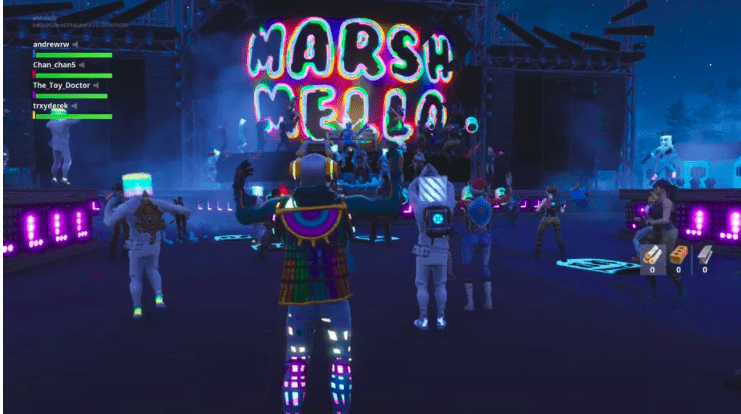 Innovative Fortnite concerts are a success

By: Luke Bennett
In: Features, Music

I have attended many Fortnite live concerts since they started and have watched them grow in popularity. Since the COVID-19 pandemic has made it impossible to have in-person concerts, Fortnite has adapted to fill this gap online.

Fortnite is an online video game that has become extremely popular since its release in 2017 and has since been popular for people of all ages, but especially college-age gamers. The Fortnite concert series is turning the platform into a virtual stage for top musicians to perform in an online setting.

My first Fortnite concert was Travis Scott, where he released his newest song “The Scotts” featuring Kid Cudi. I loved that concert because it was so interactive; when the song started playing, you could see Scott come flying in and then your character in the game was floating in the air.

Another concert I attended, by Domnic Fike, was enjoyable because of the details happening around you, much like the Scott concert. The colors on the stage would change as he sang, and you could see the hologram of Fortnite characters dancing to the song. There was also a vending machine with crash pads and other things that you could play with, while the big screen showed Fike performing his songs.

These virtual events really captured the feeling of being at a concert, with Fortnite allowing you to connect with both friends and music, the two most important things you would find at any in-person concert. I really thought it was exciting that I was watching Fike release a whole album while listening to it with my friends on the game.

It is revolutionary how the music industry has partnered with the video game industry during COVID-19 to create the innovative concept of online live concerts in video game fashion.

Fortnite anticipates doing live concerts in the same way artists go on Saturday Night Live and perform an album or a song. I hope that this is something that Fortnite will keep doing, and I expect it to only get better and better.

Popular artists like Scott and Marshmello have already performed on Fortnite. Fortnite concerts are just the beginning of something that will go on for a long time and will likely initiate similar concepts in other video games as well.

These concerts are a great way to socially distance but still fulfill your entertainment cravings.

2020-09-24
Previous Post: How to survive being a slave to the screen: maintaining mental health, easing struggles
Next Post: ‘I’m Thinking of Ending Things’ is surreal