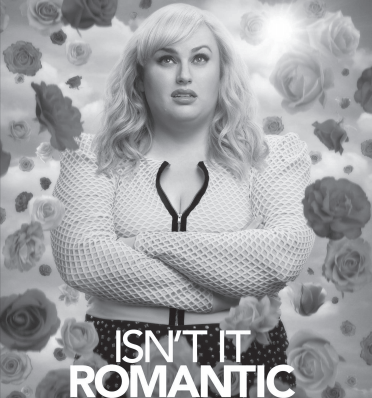 “Isn’t It Romantic” only for 90s kids, parents

“Isn’t It Romantic” is a delightful romantic comedy intended only for those who are already familiar with romantic comedies. Written by Erin Cardillo, Dana Fox and Katie Silberman and directed by Todd Strauss-Schulson, it lovingly skewers tired tropes, but at the expense of substance.

The film is about a promising but overlooked architect, Natalie (played by Rebel Wilson), is completely disinterested in love.

During a mugging, she hits her head and wakes up “in a rom-com” – everything is picturesquely perfect. Natalie’s clothes, apartment, workplace and even her dog look straight out of a catalogue.

Natalie is appalled and does everything she can think of to get back to “real life,” but it takes more effort, more soul-searching and more of the dreaded L-word than she bargains for.

Natalie’s romantic focus is Blake (played by Liam Hemsworth), who is an entitled jerk in real life but completely beguiled by Natalie in her rom-com world.

She also has a best friend, Josh (played by Adam Devine), who may or may not have feelings for Natalie as well. In rom-com land, he falls for Isabella (played to the hilt by an underutilized Priyanka Chopra).

Before Natalie hits her head, her life is drab and grungy. People are self-absorbed, clothes come in varying shades of gray and Natalie’s apartment is tiny. There is swearing and grime everywhere.

Afterward, bright colors and cheerful natures rule the day. Natalie is her firm’s top architect. There are ludicrous amounts of flowers everywhere. Natalie’s apartment is enormous, tasteful and full of the nicest items she has ever seen, including every pair of shoes she has ever coveted.

The tradeoffs of this perfect world are few but significant: Natalie’s previous friend and assistant Whitney (played by Betty Gilpin) is now a cruel coworker. Natalie trips constantly over nothing. Her attempts to curse are humorously censored by everything from trucks honking to elevators dinging.

She also cannot have sex, as it always cuts to the next scene. “I’m in a [bleep]ing romantic comedy! And it’s PG!” she cries. Natalie’s best friend is no longer Josh but Donny (played by Brandon Scott Jones), transformed from a sulky neighbor into a caricature who “set back the gay rights movement by a hundred years!”

In a world where everything is bigger, brighter and more brilliant – including her – and where the potential for true love lurks around every corner, Natalie grows increasingly frustrated. She does not care about love.

She would happily trade her glorious shoe collection for the ability to walk without stumbling. She just wants her old life back, complete with disrespectful coworkers, old-fashioned cussing and an assistant who likes her. Natalie rejects rom-com perfection at every turn.

Viewers need to be in the 25-50 age range, overwhelmingly female and to have watched rom-coms ravenously in the nineties.

This describes my mother and I (she raised me exclusively on Disney and rom-coms) but not, for example, three-quarters of my friend group or nine-tenths of my classmates.

“Isn’t It Romantic?” covers common rom-com tropes like relatable clumsiness, bitchy coworkers and sassy gay friends, but it also tips several nods at specific movies. There are call-outs and saucy winks to “Notting Hill,” “Pretty Woman,” “Sleepless in Seattle,” “Sixteen Candles” and “When Harry Met Sally,” among others. Natalie says, “You had me at hello-copters,” which is funny if you have seen “Jerry Maguire,” but confusing if you have not.

From a feminist perspective, results are mixed. There are three common litmus tests: the Sexy Lamp test, the Bechdel test and the Mako Mori test.

Rebel Wilson herself cannot be replaced by a sexy lamp. However, despite her best efforts, Priyanka Chopra’s character Isabella can.

In the real world, all females are capable of talking about something besides men, passing the Bechdel test. While in rom-com land, the only topics of conversation are men and clothes (which are worn for the sake of men).

The Mako Mori test refers to the character from Pacific Rim, who had an entire character arc which did not revolve around a man. Natalie’s arc is about her struggle with her own self-worth, which ironically becomes focused on a man, Blake.

In other romantic comedies, the female lead’s focus is on falling in love and living happily ever after. The twist here is that Natalie wants a man to fall in love with her, so she can escape the hellishly perfect rom-com world. She loses sight of what is genuinely important to her until the climax.

There is a happy ending, neatly tied up with a bow. This is still a romantic comedy, after all, even if it is a parody.