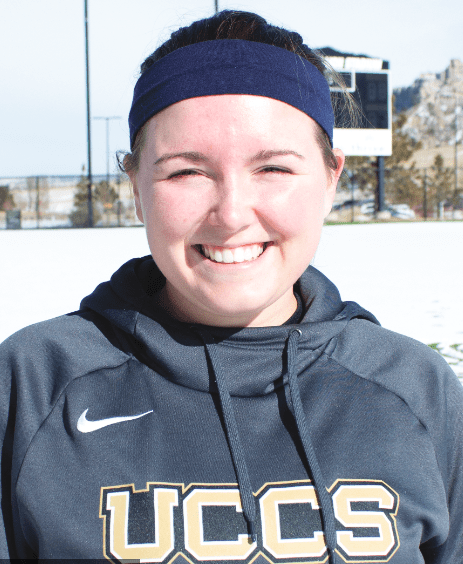 Lacrosse player Maddie Ellis shines on the and off the field

By: Travis Boren
In: Sports & Recreation

“There wasn’t a foundation coming in, we had to build it,” said Ellis.

Madison Ellis was the first person to officially sign as a member of the womens’ lacrosse team when Head Coach Christine Hatton started the program four years ago.

When Ellis joined there was no team to meet. She became the team, along with Hatton, until other members signed on.

“There wasn’t a foundation coming in, we had to build it,” said Ellis.

Building the team has been hard for Ellis and the hardest part for her has been the amount of turnover as members of the team came and went. The only consistent parts of the team were change and Hatton.

She did not enjoy watching the turnover happen but holds no ill will for any of the people who left the team to move on to other endeavors.

Ellis has played lacrosse since she was eight years old and was going to stay with the team because she wanted to be here, regardless of what happened.

“I’m pretty sure, with the exception of two games, I’ve played in every game through my entire career,” said Ellis. She has stuck it out through an ACL repair, and she knows her knees are bad. Despite that, she keeps playing and working.

Ellis wears many hats, and just like the team, has changed each year. She started as a biomedical sciences major, joined UCCS Radio as a volunteer, became the station manager, became the captain of the lacrosse team, added a business minor, stopped being the captain of the lacrosse team, and restructured the way UCCS Radio operates after participating in a campaign to adopt the Student Media fee.

Her time as the team captain taught her about what she wants out of leadership.

“It wasn’t as important to me as it would have been to someone else, so I knew that I didn’t need this title to be someone to guide other people,” said Ellis. She has been refi ning her leadership skills through coursework in her minor.

Ellis is not a loud leader who tells people what to do and her time as captain taught her that she is not that kind of person.

“I try to speak softly,” said Ellis. “I don’t need to be loud to do something.” Ellis treats lacrosse like a place of business and tries to avoid being loud when interacting with coaches and players.

Her lessons in leadership were essential when Ellis restructured UCCS Radio after the adoption of the Student Media fee. Ellis learned how to build an organization and establish a team of leaders, something she was already doing as a leader on the lacrosse team. Before she did that, one person oversaw everything within the radio.

“It’s never bad to have a communication background, so I stuck with [the radio],” said Ellis. Working in different environments and with a yearly rotating cast has taught Ellis about how to work with people on the fly.

Even with all the difficulty of building a program and having a different team every year, Ellis values everyone she has worked with. She wants everyone on the team to succeed and she speaks up to make sure that happens.

Ellis’ highlight for being a member of the team has been the people she’s worked with, no matter how long they have stayed with the team.

“The highlight of the experience is knowing these girls,” said Ellis. “They’re all awesome.”