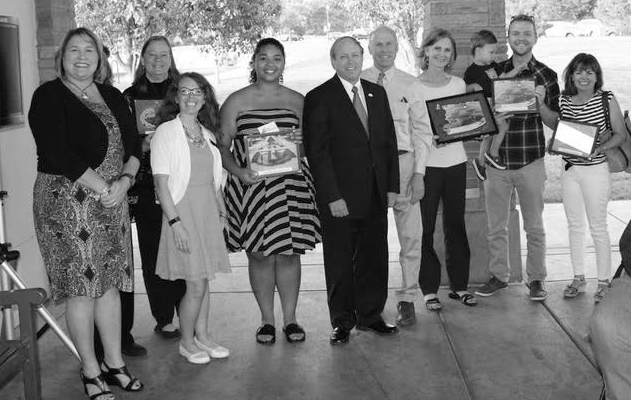 By: Logan Davel
In: Uncategorized

Editor’s Note: Logan Davel is the vice president of the Peak Ambassadors to the Dean club on campus. Davel wrote this article as a guest column to The Scribe.

Within the first few months of our newly-founded club’s establishment, the LAS Peak Ambassadors have dedicated an enormous amount of volunteer hours towards the city Parks and Recreation program.

Most notably, the ambassadors spent the summer planting and maintaining a community garden in downtown Colorado Springs.

Through registration with the Colorado Springs program, Springs in Bloom, the club was able to adopt a plot in the heart of the city. Located at the East location in front of the Pioneers Museum at the corner of Vermijo and Nevada, the garden can be recognized by its vibrant array of flowers and its stone centerpiece.

Founded in 2004 by councilman Jerry Heimlicher, the Springs in Bloom program aimed to involve citizens in the establishment and upkeep of various flower plots throughout the city. Since that time, members have maintained these plots jointly with the city in the spirit of community improvement.

Not only are the flowers, design arrangement and watering services provided by the city, but citizens have agreed to weed and otherwise maintain the plots themselves with provided training from horticulturalists.

The program also relies on flowers grown locally through the Parks and Recreation greenhouse, a city-funded source of flowers which has greatly impacted the colorful nature of our city.

Once the plot design and flower colors were approved by the city through their plot adoption program, a team of LAS Peak Ambassadors volunteered multiple days to arrange over 200 annual flowers including marigolds, geraniums, petunias and coleus pineapple surprise.

While the original goal was to make our city a more colorful and beautiful place, we found that a small community was created in the process. Pedestrians and their children, the homeless, and other circumstantial individuals quickly came together to help our team with the planting and gardening.

It was the colorful community, not the act, that made the long days of planting worthwhile.

The goal of introducing this community service project to the club was to exemplify the positive change that the LAS Peak Ambassadors aim to create within and out of their own college.

To begin with, the plot they were given had weeds, litter and lots of dirt—an obvious eye-sore. However, after several days of landscaping and planting the design they were given, the small area was turned into something beautiful.

This sort of community outreach is only a single part of the enormous plan which the LAS Peak Ambassadors have for our college and community.

If you haven’t yet seen the garden, you still have a chance. But you should know that the plot will be raked and rototilled in late October in anticipation for the winter months.

Don’t miss out on seeing how these students have represented the College of Letters, Arts and Sciences, and spread the word on the community outreach programs that are soon to follow over the course of the school year.