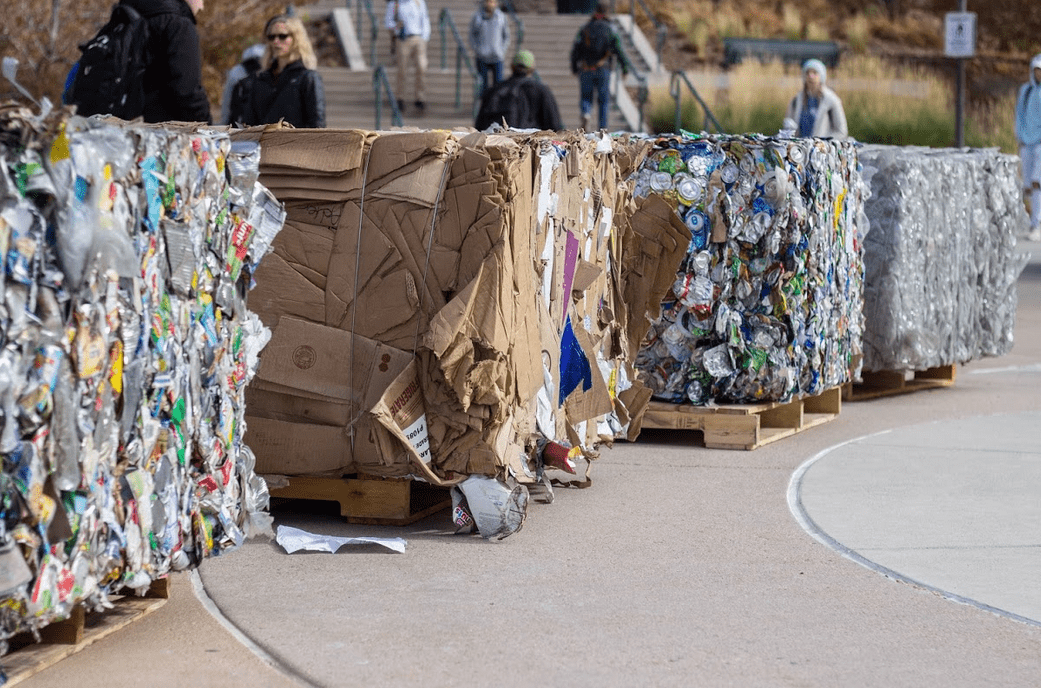 At the Mount Trashmore event in El Pomar Plaza, students learned how to dispose of various kinds of food waste properly by getting some hands-on experience sorting trash from different buildings at UCCS.

The Office of Sustainability is hosting this event as a learning experience for students to know what kinds of trash go to landfill, recycling or compost. Different kinds of waste are not only being put in their correct spots, but it prevents people having to go through and sort through the trash later.

According to the student coordinating the event, Trent Werner, this event is being hosted in coordination with Facilities Services on campus, who go out and collect trash from different trash receptacles located at places to eat around campus, and students end up participating in the trash audit that helps students better dispose of their trash.

“Mount Trashmore is an event that our office [Office of Sustainability] holds annually,” said Werner. “We do them in the fall as our campus’ largest food waste audit.”

Mount Trashmore is primarily an educational event that shows students the amount of resources they save by putting food waste in the proper container.

In previous years, there have been close to 35 students at the Mount Trashmore events, and Werner said the numbers for this year should be higher, especially with the interest shown by different fraternities and sororities on campus. However, according to the Kimberly Reeves, program manager in the Office of Sustainability, there were not as many students present at the actual event as expected.

While there may not have been as many students as expected, volunteers did show up, including Conagher Haun and Victoria Beplay, both working for about two hours at the event. The other hours were spent at their booth informing students about the existence and mission of Students for Environmental Awareness and Sustainability (SEAS).

“We’ve gotten a lot of attention for the metal straws. It’s been interesting to see how many people know about the straw movement that’s happening, but haven’t actually carried reusable straws on them,” said Beplay. “A lot of people didn’t really know how accessible it was to get straws.”

The push for reusable straws on campus has been a big part of SEAS’ yearly project, and it reflects the push by various environmental activist groups in the country for getting a cleaner, more reusable alternative to the plastic straws that are more commonly found in restaurants around the country.

Haun said that SEAS has tentative plans to propose the bookstore carry reusable straws. The other part of their objective besides offering alternatives is to educate the public about where the straws commonly end up, which, according to Haun, is the ocean.

On top of working within the area of the straw project, SEAS gets involved with politics in different ways. Part of their goals for this year involve getting people registered to vote, and making it easier for people to be able to do so. Another area of political involvement was the debate that occurred on campus regarding Amendment 74 and Proposition 112, both Colorado Ballot Initiatives that have received large amounts of attention from politicians, activists and newspapers all over the state.

“Various SEAS members are going to be there [the debate], and they’re going to try and pass out some pamphlets from the League of Women Voters, that has nonpartisan information about all of the initiatives,” Beplay said.

Haun added that the League also operates the Vote 411 website that allows people to put in their zip code and be able to determine what issues they will be able to vote on this year and information about the candidates and issues.