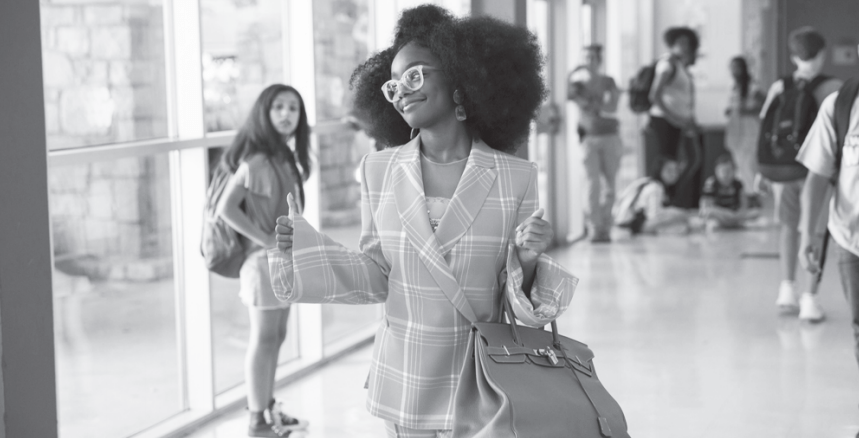 Released on April 12, 2019, “Little,” directed by Tina Gordon, lives up to its name with an underwhelming yet enjoyable theatrical experience, proving that even the littlest films can leave an impact.

The plot is simple: successful business woman Jordan (Regina Hall) faces struggles in her workplace with creativity and relationships, being called out for her bossy demeanor and unrelenting coldness. Her assistant, April (Issa Rae), lives in her boss’s shadow, unable to share her originality with her coworkers, who are desperately in need of fresh ideas.

Jordan’s attitude quickly catches up to her when a young girl wishes she be young again — a successful bout of magic — in the hope that Jordan faces her childhood demons and corrects her behavior as an adult. The dynamics between assistant and boss switch as April is now put in control of Jordan’s professional and personal life, and Jordan must now live her unlikely life as a child once again, this time in her modern life.

If this story does not strike you as original, then you have the right idea.

“Little,” itself paying homage to the 1988 classic “Big” starring Tom Hanks, is in no way original in its themes or cinematic strokes. The classic theme, overplayed across many films and decades, is evidently undying — or perhaps on its way out.

While Gordon’s film is not particularly great in regard to its artistic result, “Little” does meet some moments that allow for an easy, enjoyable hour-and-a-half screening.

For starters, the story we all know is easily digestible for all viewers. It is something that everyone wishes for: the chance to go back and correct where we went wrong, the opportunity to mend old and make new friendships, and just a touch of magic (in the cheesiest way possible).

In addition, the film from the outside appears to be mainly geared toward black moviegoers; this is arguable. Actually, the film plays pretty well with normalizing characters of color, with white actors typically playing minor roles. There are jokes here and there focusing on black characters, but the movie in general chooses to follow a neutral storyline in regard to race so that the movie can be enjoyed by anyone.

“Little” also leaves no room for romanticism, even though it does carry a superficial vibe about romance. That’s not to say the characters do not seek love, they do. But instead, Gordon’s flick focuses on more important issues, like strengthening friendships, work relationships and the characters’ relationships with themselves.

That is where the film succeeds most. It promotes self-love and improvement so that you will not help but feel warm from the Jordan and April’s inevitably growing friendship.

There are several moments of cheesiness (maybe more like a constant stream of cheesiness), but that’s mostly expected. Fortunately for director Gordon, this is not harmful to the film. In fact, the cheesiness makes it all the easier to digest for the moviegoer. What makes it work in “Little” is that the movie is aware of its cheesiness, it does not try to hide its campy qualities and subpar writing. Because of that, this movie is not at the mockable level as cult movies well-known for their bad quality.

Aside from the storyline and direction of the movie, the acting is nearly impeccable. Issa Rae shines so bright here that the dialogue — though it may at times feel forced — puts itself secondary to Rae’s acting style. Her realism is simply fantastic.

It is enjoyable in its simplicity and familiar themes, allowing for a heartfelt, humorous experience for the casual moviegoer. Do not rush to get a seat in the theater for this movie, but take advantage of its release while you still can.

2019-04-23
Previous Post: Cafe 65 adds chicken, and it’s no clucking matter
Next Post: Patrick Yarnell speaks on the top records in his life