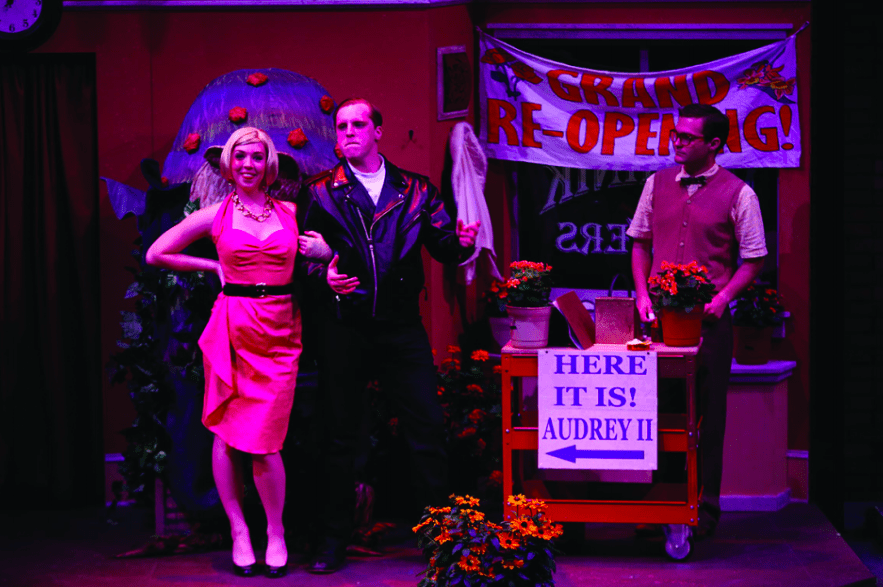 By: Sarah McMillan
In: Culture

On the UCCS campus, the Ent Center for the Arts is a 92,000 square foot building that was constructed specifically for this purpose of creating opportunities for the arts. The building opened in January of 2018 with the motive to provide a multi-venue area for both visual and performing arts.

From April 25 through May 19, the timeless classic “Little Shop of Horrors,” directed by Nathan Halvorson, will be presented at the Ent Center.

Originally, “Little Shop of Horrors” was a comedy-horror film that first premiered in the 1960s and later debuted as a musical on stages across the nation.

The approximately two-and-a-half-hour show tells the story of Seymour, a nerdy clerk who works at a struggling floral shop in a rough and run-down New York neighborhood.

Seymour obtains a Venus flytrap like plant which he names after his beloved coworker, Audrey. The plant immediately gains the attention of a customer and soon drives business to the shop. However, as business begins to bloom, the plant slowly starts to wither as time goes on. After he was accidentally pricked, Seymour learns that the attractive plant is surprisingly very demanding and needs human blood to survive.

The artistic team behind the musical has put in countless hours since early January working in preparation for the production. The team includes directors, managers, designers and the cast members.

In a nutshell, the individuals specifically responsible for the design elements in the musical consist of the scenic, lighting, sound, costume and property designer.

Steven Baglio, the property designer and prop master, explained all of the different aspects that go into producing the best possible musical as well as his specific role in the production.

Baglio stated that as the properties designer, his job is never boring and that while designing a production, “the sky is truly the limit.” As far as “Little Shop of Horrors,” audiences can not only expect elaborate props, but also elaborate costumes, lighting, dances and more.

Of course, Baglio did not want to give too much information away regarding the show, but he described some of the props that he is the most proud of, including a “creepy dentist chair” and “huge, life-like tendrils.”   The abundance of work that the designers and the rest of the crew have put into the production will be exceptionally clear and obvious when the musical has its first show on April 25.

Baglio expressed the environment at the Ent Center and explained why students should become involved.

Doors are open for the entire public, and anyone who has the desire to can audition for productions or interview to work at the center. The wide range of creative diversity at the Ent Center creates a strong and inclusive community atmosphere where, according to Baglio, “anyone can voice their own ideas and opinions.”

The Ent Center welcomes all guests who would like to see “Little Shop of Horrors” as well as any other musicals or shows that are taking place. Student discounts are offered while purchasing tickets and any student who is able to present a UCCS student ID can enter most productions at no cost.

If you are looking for a a funny, creative and somewhat creepy musical, tickets are available for “Little Shop of Horrors” now. Stop by the Ent Center to experience what Baglio described as “live art” in a friendly and strong community.