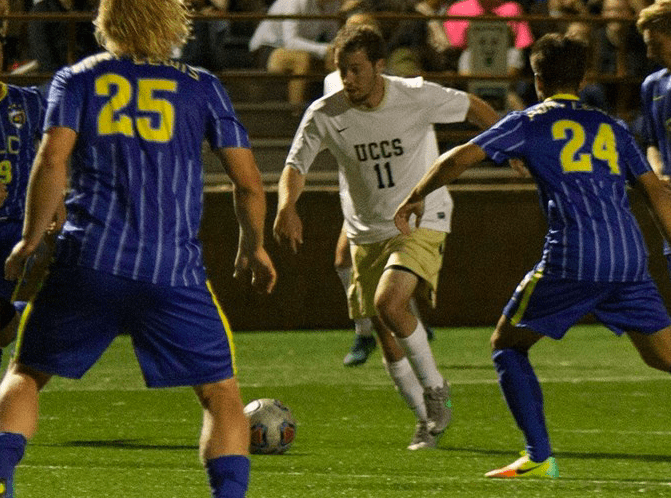 Playoffs are quickly drawing near as fall sports at UCCS approach the middle of their season.

Before the big game occurs, men’s soccer will develop a defensive strategy to be successful against their opponents.

Even with their success, this season has presented challenges for the players, according to head coach Johnnie Keen.

“It’s been a difficult season. We started off very optimistic being one of the top teams in RMAC, [and] unfortunately, that’s not how things are looking halfway through the season,” said Keen.

The team has played 11 games so far, with six of those games being under the RMAC.

They began the season against Central Arkansas on Aug. 17, winning the tournament 4-3 against the Division I program. In Wichita Falls, Texas, the team lost 0-1 against Texas A&M on Sept. 1 and 0-2 against Midwestern State on Sept. 3. This loss was unexpected, according to senior goalkeeper David Meyer.

“We went to Texas and it didn’t go the way we wanted it to, but we played some really good teams,” said Meyer.

Last season, the team had an overall record of 12-7-1, winning 12 of their total games and the RMAC first round against Fort Lewis on Nov. 2. Losses this season may be due to injuries, said Keen, whose focus is to strengthen his team.

“Our focus is to get the healthy guys playing well enough to win the games and then when the others get back, we will hopefully be a little stronger,” he said.

“We just have to focus on the next game, and I think that was one area where we miss stepped this season. That’s the strategy right now for the RMAC, so we just have to do the best that we can.”

According to Meyer, the team has gone through significant changes in terms of their players.

“It’s different; it’s a whole different team,” he said. “Last year, I had my brother on the team with me, which was pretty cool, and the defense is entirely different.”

According to Keen, the team is focusing on strategy within their offense and defense. Putting pressure on their opponents’ offense, stealing the ball and scoring a ball has been a successful strategy, said Keen.

However, serious injuries have inhibited their strategy, according to Meyer. The team is still developing their defensive strategy due to the injuries.

“One of my best friends tore his labrum and has been on crutches for the last two to three months. Another player also broke his collarbone. There’s been a mess of injuries,” said Meyer.

“With what’s been going on, Coach Keen talked about how there’s been so much we’ve had to overcome. I think we are doing the best that we can with all of the injuries and everything else that has been going on.”

Even with illness and injuries, the team will continue to build strength among their players.

“We are trying to possess the ball and with the personnel that we have, we have some really fast players and players who are really good at finishing,” said Meyer.

“Just getting in behind one, two or three goals in has been really successful for us”

The team will be in Denver to take MSU Denver on Oct. 13. For more information on men’s soccer, visit gomountainlions.com.