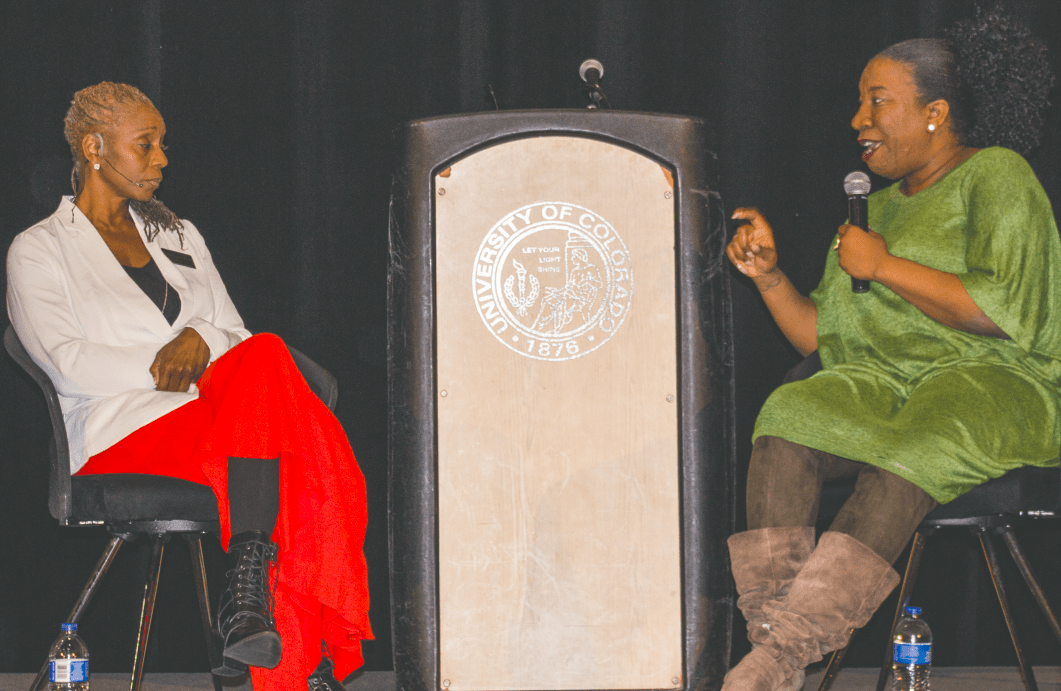 The ninth annual Significant Speaker Event presented by the Department of Student Life and Residence Life and Housing featured the founder of the “Me Too” movement, Tarana Burke. The April 16 event, moderated by UCCS’ own Rosenna Bakari, challenged public misconceptions about what the “Me Too” movement stands for and encouraged survivors of sexual violence to live openly.

Burke has worked for more than 25 years to promote social justice and to lay the groundwork for a movement that was initially created to help young women of color who survived sexual abuse and assault.

“Our greatest challenge right now is the popular narrative about what “Me Too” is. It waters down our actual work and invalidates our vision,” said Burke. “It’s not a witch hunt. It’s not about individuals, it’s about systems.”

“It’s the saddest and most challenging thing to see the process of people coming forward because their violator has a position of leadership,” said Burke, referencing the Ford-Kavanaugh hearing last year. “These people have no background or experience in the national spotlight and are talking about the worst things that ever happened to them.”

According to Burke, there is freedom in living openly as a survivor.

“I have lived as a survivor in such a way … I have a bad memory, but part of that is because I’ve spent most of my life trying not to remember,” said Burke. “It’s so hard to explain to [survivors] that the freedom that [they] felt is absolutely nothing compared to what it’s going to feel like when [they] let go.”

Burke reassured survivors that any act of sexual violence upon their person is not their fault, nor is it their burden.

“Any violation of a person is violence. Lay it down at the people’s feet of who’s fault it is,” she said. “It’s not as much about the act as much as what it left [survivors] with. There’s so much power in survival.”

Burke explained that her role as an advocate and an activist for survivors is to “stand in the gap for those folks.”

She advised that before survivors come forward with their stories they “get reinforcements, make sure [they] have done some work internally and have an external support system around [them] that is impenetrable.”

Burke explained that many survivors tweeted out #MeToo without thinking about what they would need in the process of healing beforehand.

“You had a spillage of people talking about their deepest darkest secrets,” said Burke. “I didn’t tell my mother until I was 32 that I was a child sexual abuse survivor.”

Burke believes that disclosure is hard for survivors of sexual violence.

“In a lot of ways, [survivors’] lives are destroyed afterward … public disclosure is not necessary for validation,” she explained. “Tell your story to yourself first. Hearing your own voice saying ‘this happened to me’ is important because we tend to disassociate.”

Burke expressed that the pathway to recovery is different for everyone.

“Building up security and safety looks different for everyone. Only when you feel safe should you come forward. Be careful who you talk to because once it’s out, you can’t get it back,” she said.

According to Burke, she received a lot of backlash for supporting accused assaulters like Lucy Alvarez and Joe Biden.

“Our inability to be nuanced is really problematic. Young people are influenced by what’s happening in leadership. Ending sexual violence is really about shifting this culture,” she said.

Burke believes that Joe Biden has been an amazing advocate for survivors in the past, but has displayed inappropriate behavior.

“Allowing a culture to continue that says, ‘you can touch me how you want to, you’re a good guy’ is problematic. [Biden] should be an example of what lack of accountability looks like,” said Burke.

For Burke, the issue has nothing to do with politics and is instead rooted in a deep power imbalance.

Burke said that the work that she and her organization are doing is about healing and action and helping communities work together to end sexual violence.

Burke also addressed men who are angry about the “Me Too” movement.

She continued, “It’s not just a women’s movement. There’s space in this movement for them as survivors. I need men to be less defensive, listen to what’s being said.”

Burke explained that men may feel uncomfortable with the movement, but there is a need for change.

Burke will also be implementing programs in communities to teach people how to replicate healing circles for survivors as part of her call for action. This involves survivor leadership training and work.

She also has a dream of creating the world’s largest database for survivors and advocates on the website metoomvmt.org so that “people have as much access to healing as possible.”

“There is sympathy but too little empathy. When I think of survivors, I think of the most powerful people.”

2019-04-23
Previous Post: SGA unable to approve Fiscal Year 2020 budget
Next Post: ‘Avengers: Endgame’ is half service to the fans, half actual movie