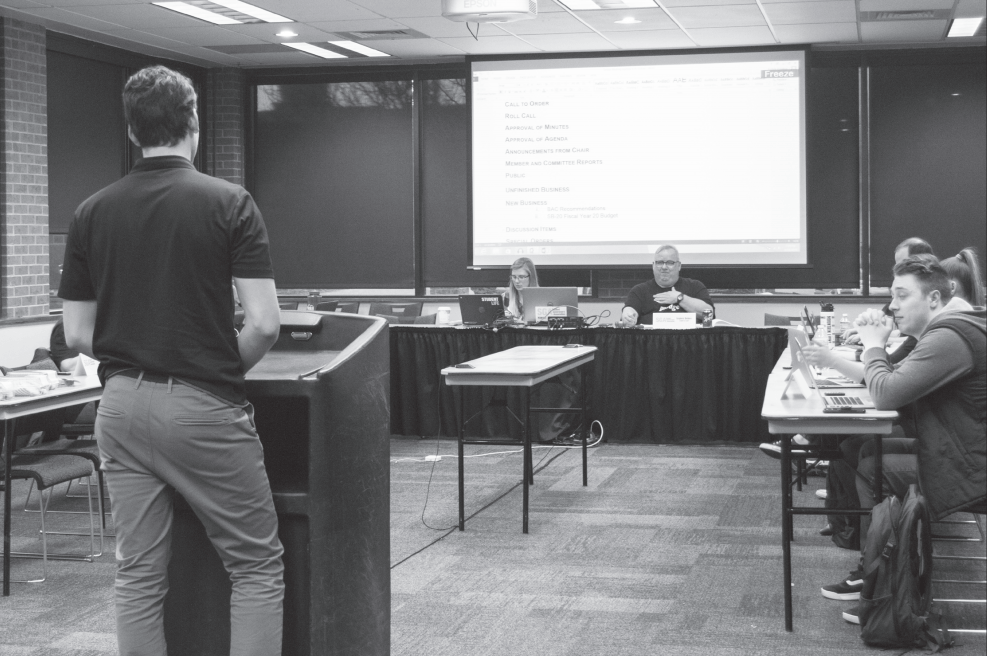 The Fiscal Year 2020 Budget includes the yearly funding requests from multiple clubs and organizations on campus.

After approximately an hour and half of debate regarding one funding request, the Fiscal Year 2020 Budget was tabled to next week due to some disagreement among senators.

riverrun, a student-run journal which publishes student works, requested $8,250 initially in last Thursday’s senate meeting. Since 1971, riverrun operated only as a club, but this changed in the 2015-16 academic year, when riverrun also became a class.

This change caused debate among senators. Senators questioned if SGA should provide as much funding for them since students involved in riverrun are paying for the class, which led many senators to assume that the class would, in turn, pay for publication and other costs.

“Why do we have to give them funding if they’re paying tuition?” asked Senator of Business Connor Price.

Such challenges led a majority of the senators to vote to amend riverrun’s proposal and change the amount requested to $6,150 and give the remaining $2,100 to the Gallery of Contemporary Art (GOCA), amending GOCA funding request to $10,600.

“I just think the money should go to GOCA because their programs benefit the entire campus,” said Senator of LAS Lisa Hinton, who first motioned to amend the proposal.

Other senators felt differently about how SGA should handle the issue.

“I don’t think it’s up to us to take the money away from them,” said Senator of the Arts Dan Boyd. “It’s not fair to punish them now without them first having the conversation with the College of Education so the college can find it in their budget for the next year.”

When it came down to approving the amendment, the senators unanimously decided against it.

“I think it would be important to give them a chance to talk, explain to why they’re asking for that money. Maybe they didn’t know this would be a big issue tonight,” said Senator-at-Large Kassandra Pontilo.

Senator of LAS Lisa Hinton then motioned to table the Fiscal Year 2020 budget until next week. The motion was approved 5-4. All conversation on the matter ceased, and the budget will roll into unfinished business for next week’s agenda.

“Funding requests from the SGA affects programming support and helps keep the Gallery open. We are able to provide open access to campus in part of the proposal through SGA. Through that, we serve many students,” he said.

Phi Sigma Sigma requested $2,000 for conference fees to send approximately 56 members to a retreat next semester from Aug. 23 – 25. Their request was approved with 8-0 with one senator abstaining.

Indian Student Alliance requested a total of $1,125 to help put on their coming of spring event, the Holi Festival of Colors on April 27 from 11 a.m. – 2 p.m. on West Lawn. 100 people are estimated to be in attendance. The event will provide an educational insight into the celebration in India and explain its significance. Their request was approved 9-0.

PGA Golf Management requested $156 to fund a trophy to be stored on campus for advertising purposes. The trophy will help advertise the Annual Family and Friends Golf Tournament, which is their main fundraising event. Their request was approved 9-0.

Earth Center Club requested $65.34 for a tarot card and oracle card reading event on April 19 from 7 p.m. – 8 p.m. in Columbine 214. The reading event will give students an opportunity to learn ancient tradition. Their request was approved 8-0 with one senator recusing.