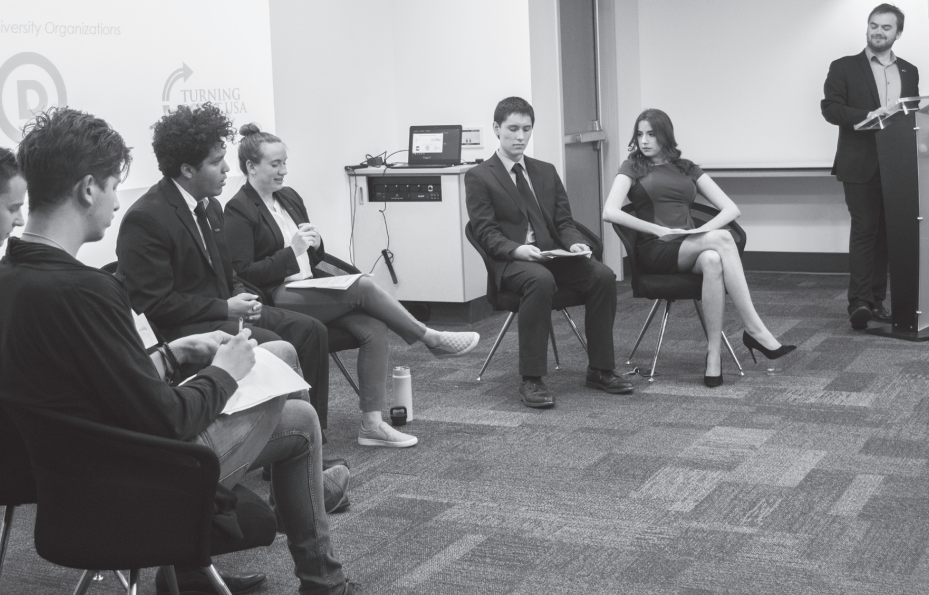 Socialists, democrats and conservatives face off in debate

The Economics Club hosted a debate between the Colorado Springs Socialist Discussion Club, College Democrats and the UCCS chapter of Turning Point USA on April 18. The debate was about the merits and practicality of socialism, free-market capitalism and ranges of ideologies in between these beliefs.

This debate is the second rendition of last year’s debate between the College Democrats and the Socialist Discussion Group, which according to members of both clubs, was a productive discussion that added a lot to the overarching debate.

Turning Point USA was involved in the debate in order to give a more right-wing viewpoint on economics this year. According to Brian Yee, president of the UCCS chapter of Turning Point USA, there was a previous attempt to set up a debate with the Socialist Discussion Group that simply didn’t work out due to scheduling conflicts.

At last Thursday’s debate, each club provided two representatives to debate their points. Each team was provided three minutes for opening statements, after which participants responded to a list of questions generated before the debate by the Economics Club.

The questions included items such as wealth inequality, student loan debt, healthcare and the future of socialism and capitalism. Each club was given two uninterrupted minutes to address the topic, followed by a five minute period of free-for-all discussion, where each club had 90 consecutive seconds for each exchange.

After the official question section finished, each team had an additional three minutes for closing statements, then an audience question-and-answer session with club responses being limited to one minute each.

According to Palzic, the Socialist Discussion Club decided its representatives by determining members’ level of interest and education on the perspectives. Some of the challenges Palzic said would likely arise within the debate included defining the issues of what socialism and capitalism were and coming to an agreement on the terms.

Augusto Tomszay, vice-president of the College Democrats, as well as president of the Economics Club, said that some of the major obstacles that could arise within the debate would include not only knowing what positions each participant holds, but being able to discuss those positions civilly, with the audience ending up with a better understanding of each stance.

The topic most relevant to UCCS students was student loans and how to deal with them according to various student perspectives.

According to the Socialist Discussion perspective, the best way to deal with the debt is to cancel it and work to make college free for everyone. One of the points that the Socialist Discussion group makes is that because college is getting more expensive, it’s creating more economic inequality, as well as putting up barriers to those who don’t have the money to afford college without a loan.

According to College Democrats, the best way to reduce student loan debt is by initiating student loan forgiveness, which frees up students’ funds to be able to contribute to the economy in other ways through the free market.

Turning Point USA’s stance included eliminating federal student loans, but more importantly, eliminating the belief that all students must go to college in order to be successful, promoting things like trade school and starting businesses.

Participants addressed that there is a large increase of interest in socialism in the 18-35 year old area, and more left-leaning members of the debate pointed towards the inability of capitalism to solve problems as the reason. Turning Point USA states that this turn towards socialism is only present because there is a heavier perception of problems within capitalism that students have, more so than actual problems with free-market economics.