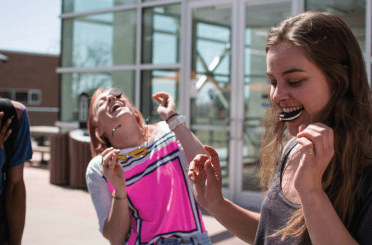 A beautiful spring day was the perfect setting for a student fair on campus.

While the wind may have occasionally wreaked havoc on the cups and props used for the games, it did not diminish the games and activities at each table.

“We put (the carnival) on to have a little bit more visibility on campus and to promote student involvement. We had a president three years ago who came to a meeting and said, ‘Let’s do a sort of student carnival,’” she said.

The carnival featured games inspired by television game show, “Minute to Win It,” that were designed to be played and won in under a minute.

Games included “This Blows,” where students were required to use an inflated balloon to knock over a line of cups, “Sticky Situation,” which involved bouncing a ball onto a plate of peanut butter and “Rapid Fire,” where students used a rubber band to target and knock over a pyramid of cups.

Participants, like freshman English major Haley Bean, were drawn to the carnival to have a good time.

“I was actually eating lunch, and I saw the fair, so I thought ‘hey, this looks like it could be fun,’” said Bean.

While all the games received a few visitors, a few generated even larger crowds, said Fritz.

2017-04-16
Previous Post: Early April crime: reports of theft, drugs on campus, crime in surrounding area
Next Post: Base your political opinions off logic and credibility, not 140 characters