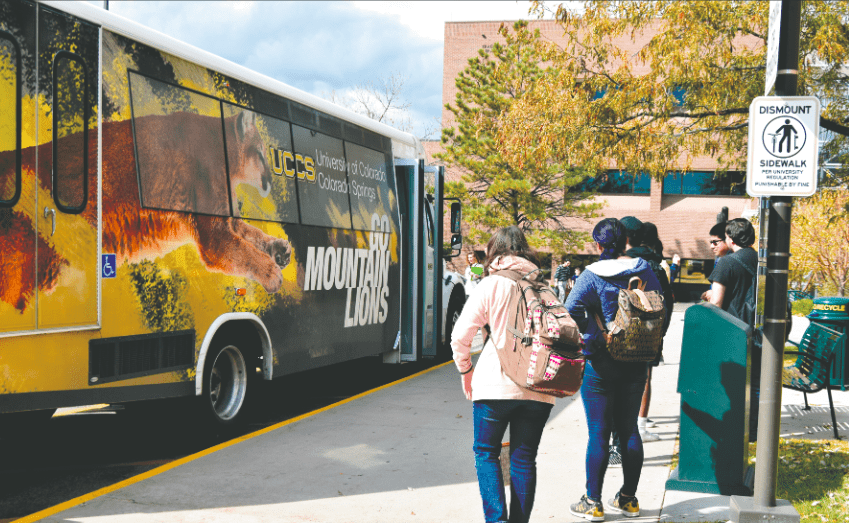 UCCS’ campus is large enough that pedestrian movement can often be unfeasible. In order to park for free in lot 580 and attend classes in University Hall, a student would have to walk nearly three miles. So, the university has shuttles.

When the university built Spine Road, it consolidated its shuttle system into a single route. Since then, executive director of Parking and Transportation Jim Spice has made attempts to improve the route and make it more efficient. Since then, he has received mostly positive feedback.

Kent Marsh, associate vice chancellor of campus planning and facilities management, and Spice rode the shuttle from one side of campus to the other to obtain gather information from riders, according to Spice.

They were able to gain several reviews from student riders, all of which were positive.

By adding stops, such as lot 540 — the dirt lot — and the Eagle Rock stop that is next to the ROTC modular, the campus university connected parts of campus that were unvisited by campus transportation. “The old two-route system was on a 25-minute loop, so it would take twenty minutes to travel from Lot 580 to the main campus,” James Rehkopf, manager of transportation, said.

The new route is more efficient, according to Spice, and that the students who he has spoken to so far have given him mostly positive feedback.

Students who get out of class late at night have had longer commutes to lot 580 because of the extra stops along the way.

Spice added, “Our last bus leaves Centennial Hall at 10:12 p.m., but we have heard that some professors keep you over, and people are missing that bus, so we are thinking about extending that 10:12 p.m. a little bit later.”

Daryl Gifford, a senior biomedical major, said that the new system has positive and negatives.

“On the days that I am down at UHall, it is really nice because it’s one stop all the way to 580,” said Gifford.

Olivia Evans, a junior biochemistry major, said that the only issue she has is that the shuttles are crowded in the morning, but that it is not a big issue.

A bus takes 33 minutes to complete a loop under the current system, from departure at a stop to its next departure at the same stop, with the path from Alpine garage to University Hall taking 18 minutes with the current schedule.

Spice also added that the bus drivers are positively impacted by the new system. During a meeting, drivers said that their stress levels are decreased after the change, and that they appreciate no longer having to drive on Austin Bluffs Parkway.

When the new route officially opened, the shuttles were taking around eleven minutes for the rotation, but the stops have tightened up since then.

Spice also added, although not being in the foreseeable future, the current shuttle system will eventually change if plans are pursued to build a bridge from the Ent Center parking lot to the baseball diamond lot, avoiding the need to use North Nevada Avenue to connect the lot 580 to the rest of campus.

Spice is confident that the University will find money in the future to finish these plans which he believes will improve the campus’ travel needs and further impact UCCS positively.