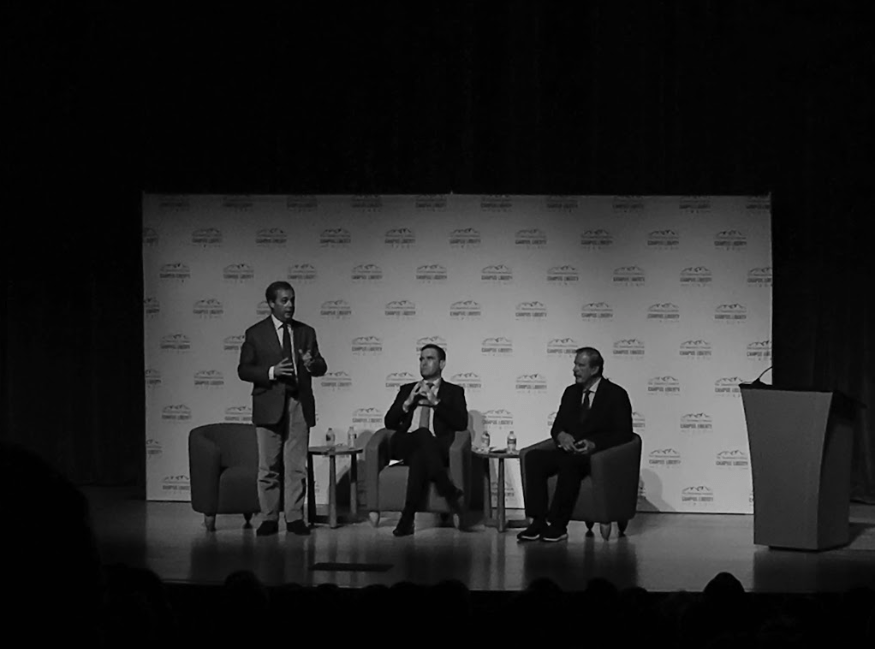 Moderator Tom Rogan, columnist for the Washington Examiner, posed his first question to an audience of 550 at the Nationalism vs. Globalism debate on April 3. Audience members met the question with a few resounding claps.

Nigel Farage and Vicente Fox discussed issues within the realm of globalism versus nationalism, including free trade, tariffs and immigration, in the Shockley-Zalabak Theater.

The debate was part of the Campus Liberty Tour, which is sponsored by the Steamboat Institute, a nonprofit educational organization that seeks to promote America’s liberties and freedom.

The event was brought to UCCS by the UCCS Center for the Study of Government and the Individual. On April 2, the tour also visited CU Boulder.

Chancellor Venkat Reddy opened the event with remarks regarding free speech and expression of thought. “We want to teach you how to think, not what to think,” said Reddy.

Farage, a co-founder of the United Kingdom Independence Party, is known for his involvement with the implementation of the Brexit referendum. The referendum sought to separate the United Kingdom from the European Union in 2016 due to dwindling trust in leadership and nationalist attitudes.

Farage discussed how the “nationstate has made a comeback” in regards to Brexit and a “global revolution” that began with the 2016 general election in the United States.

“For the first time, since the American revolutionaries got rid of that terrible King George III, I think I can stand before you and say that we (the United Kingdom) set the trend,” said Farage, who claims the Trump campaign followed on the heels of Brexit.

Fox served as president of Mexico from 2000 to 2006. He has been an outspoken advocate for the preservation of the North American Trade Association and immigration reform.

“There is no other human issue higher than our freedom,” said Fox. “Let’s build a better world with love. Let’s build it with compassion.”

The two debated the pros and cons of globalism with the core agreement that countries should work together. Where Farage differs in his argument, he said, is that he believes globalists have been aided and abetted by big businesses and banks, which hurts “ordinary people.”

However, according to Fox, globalism has benefitted the world order as it has helped people climb out of poverty, receive an education and enhanced the advancement of technology.

Farage defended nationalism by continually using examples of how the United Kingdom is separating from the European Union, while Fox discussed how dividing nationstates with borders ultimately hurts the world order, especially in terms of trade.

Several audience questions followed the 45-minute debate, including inquiries surrounding the nationstate’s moral responsibility to the global system, how nationalism could contribute to another war and whether or not globalism is code for socialism.

“Be yourselves. Don’t be indoctrinated by anybody,” said Fox.

2018-04-10
Previous Post: Tax day approaches: how to file and how to save
Next Post: Following CO Supreme Court decision, College of Education discusses K-12 tenure, other legislation