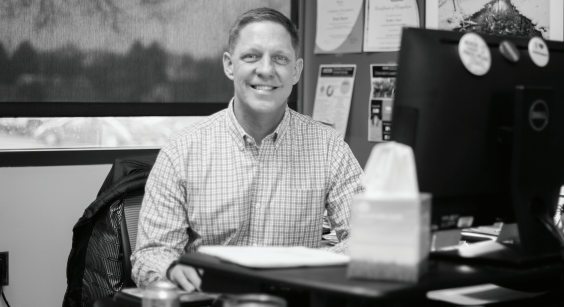 By: Edna Newey
In: News

Nominators are open for a variety of awards for UCCS faculty, staff and students to be presented at the Campus Awards Ceremony. Students are eligible to nominate campus leaders for all awards before their deadlines; however, three awards are designed to specifically recognize exceptional students. 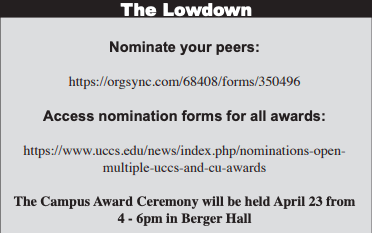 The Employee of the Year Award, the Ron Wisner Human Spirit and Leadership Award and the UCCS Student Achievement Awards recognize students for a variety of achievements.

The Employee of the Year Award recognizes an outstanding student employee in six areas: reliability, quality of work, initiative, professionalism, longevity, the uniqueness of contribution, service to campus and community.

The work study, hourly or salaried student employee who wins the award will receive recognition at the Campus Awards Ceremony, a plaque and $200.

Nominations for the Employee of the Year Award have already passed its respective deadline, but the other two student awards remain open for nominations.

The Ron Wisner Human Spirit and Leadership Award is to be presented to an outstanding undergraduate student leader who embodies each of the following criteria: vision, integrity, positive actions and relationships and teamwork.

The award is named after Ron Wisner, a UCCS dean who died in a mountain biking accident in 2010. He had retired from the position of dean and was working part-time in the Student Life Office when the tragedy took place.

“He was a champion of all student and I was lucky to have him as a mentor for the few months that I did,” said Senior Executive Director of Student Life Brad Bayer.

Bayer is also a member of the award committee that includes Wisner’s wife, Jane, and his two children, Mark and Sarah.

The Wisner family will be present at the award ceremony.

Jesse Perez, MOSAIC assistant director and LGBTQ+ program director, was the first recipient of the Ron Wisner Human Spirit and Leadership Award when he was a senior undergraduate in the communication program.

“I think that it’s an important platform for students to be recognized on and a chance to speak about what issues matter to them,” said Perez.

All undergraduate students who have not received the award in a previous year are eligible to be nominated. The recipient of the award will receive recognition at the Campus Awards Ceremony and a plaque.

The deadline for the Ron Wisner Human Spirit and Leadership Award is Feb. 26 at 5 p.m.

The other student awards that are still open for nominations are the Student Achievement Awards.

The Student Achievement Awards is to be presented to two students who made a significant personal accomplishment in conjunction with earning a degree or made a substantial contribution to the quality of student life.

Undergraduate or graduate student who graduated (or will graduate) between August 2018 and May 2019 are eligible for the award. Recipients of the awards will receive recognition at Campus Awards Ceremony, a plaque, a stipend and acknowledgment as commencement speaker.

The deadline for the Student Achievements Award is March 1.