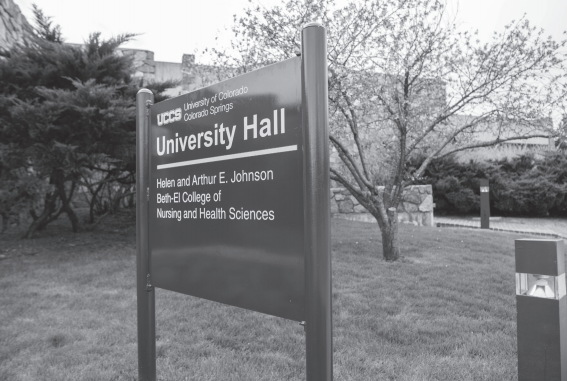 The UCCS Helen and Arthur E. Johnson BethEl nursing program has a reputation for being a competitive, difficult degree program, but nursing students do more than just study to balance their school life.

Right now, around 450 nursing students in University Hall have to work hard and learn to deal with the stress of the nursing program, according to senior nursing student Tonya Hamilton, community service director for the Beth-El Student Nurse Association (BSNA).

From the event, 162 bears were donated in March to three pediatric units: 90 to UC Health Memorial Hospital and the remaining to the Urgent Care on Briargate Boulevard and the St. Francis Medical Center.

The bears were individualized with birth certificates and special messages to each child.

According to Olivia Ostlie, president of Beth-El Student Nurse Association, the event opened her eyes to how much she and her classmates can impact lives for the better.

“Seeing the circle of influence that we have was amazing,” said Ostlie.

Hamilton said the event was a very heartwarming experience. “

We would walk in with a bear, and the kid would act as if you just handed them millions of dollars, and it was the best thing in the world,” she said.

Sometimes, passing out a teddy bear does just as much good as medical care, she said.

One of the ways Ostlie and Henderson find a balance in nursing school is through BSNA, which hosts events like career fairs and participates in various community service events like the Build-A-Bear Drive.

Community service events are just part of the bigger picture, according to Henderson; after students are accepted into the program, the workload doesn’t slow down.

Students enrolling into the nursing program this fall are likely to now be studying for the HESI Assessment, a pre-requisite for admittance into the program. Pre-nursing students take the exam after they have completed one year of prerequisite classes, including anatomy and physiology, chemistry and microbiology.

According to Ostlie, the exam, which costs $100, is challenging, although it covers basic concepts.

“I studied every night for two months and spent a whole week memorizing right before the exam,” Ostlie said. Students are required to pass the exam with at least 90 percent in the science section, like Ostlie, who received a 95 percent.

Students who earn a cumulative score of at least 90 percent are considered to be on the right track, Hamilton said.

Ostlie said that one way to be successful in the program is learning to manage the stress that accompanies being a nursing student.

“People put a lot of pressure on you. Figuring out how to deal with those stressors has been such a learning lesson for me,” said Ostlie.

According to Henderson, nursing students are required to pass classes with a 74 percent or higher, and in others, must maintain at least a 74 percent testing average.

“You need to be on your game from day one if you plan to go into the nursing program. Things you learn on day one in college, you are still required to know as a senior,” Henderson said.

“You have to know how to juggle it, because if you don’t, it’s inevitable that you’re going to crash and burn.”

Henderson believes that to succeed in the nursing program, students must learn to both accept and embrace failure. “There’s no such thing as scraping by in nursing school,” she said.

The biggest tip Ostlie offers to future nursing students is to branch out and find a supportive community.

“You need people who will support you and study with you. It’s really important to find that group,” she said.