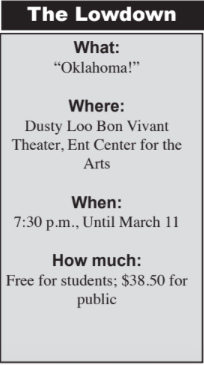 “Oklahoma!” is Theatreworks’ first production in the new Dusty Loo Bon Vivant Theater in the Ent Center for the Arts. The play takes a cliche love story and transforms it into an old, Western drama that is delightfully fun and emotionally captivating.

The production runs two hours and 40 minutes. Richard Rodgers composed the music, while the book and lyrics were composed by Oscar Hammerstein II.

Curly and Laurey clearly share feelings for one another, but are too proud to admit it . Meanwhile, one of the farm hands, Jud Fry (Dylan Mosley) pines for Laurey and the chance to share true love with another human soul.

Will cherishes Ado and wants nothing more in the world than to marry her and be her man. Ado, on the other hand, doesn’t want to be tied down and takes immense pleasure from being swooned and pursued by the men in her life.

The play exploits these relational tensions and dilemmas in a relatable way that is both humorous and self-reflective. The humor and tragedies throughout the play were spot on and had the audience laughing along or on hanging on the edge of their seats in quiet shock.

The play opens with an intense scene accented brilliantly by lighting and an innovative stage design. This dramatic opening is followed by a stirring rendition of “Oh What a Beautiful Morning” performed by Curly (Zach Guzman).

Guzman makes great use of the stage space by roaming from one side to the other, climbing up the windmill prop and engaging with the audience.

On the stage, there is a live orchestra composed of a piano, mandolin, guitar/banjo, bass, fiddle and accordion. The fiddle took precedence in many of the musical compositions throughout the play and set a pleasant country tone to the story. The live orchestra is a real treat for listeners and provides its own musical interpretation of the story.

The musical numbers were well-paced and didn’t seem forced. The melodies were light, catchy and fun to tap your foot along to.

The actors’ and actresses’ energy was contagious, projecting their voices clearly through the room without use of microphones. The dance sequences were nicely choreographed and well representative of the time period.

One of my favorite musical numbers was the “It’s a Scandal! It’s a Outrage,”which had me laughing the whole way through at the expense of Ali Hakim (Carmen Shedd) one of Ado’s exasperated lovers.

There were also quieter, romantic moments in the play where lighting came in once again to set the tone and cast dancing shadows along the wall.

Jud is the antagonist of the story and portrays this lonely man who has something off about him. The rest of the farm hands are wary around Jud and don’t fully trust him, as they suspect he is hiding a darker side.

However, this tragic character is one that most of us can relate to. He’s lonely, never felt true love and is rejected by most everyone he meets. This contrast adds deeper layers to the story and makes the audience both fearful and sympathetic of this character.

I enjoyed this play and would highly recommend students to go see it, especially when students can get in for free, whereas normal tickets start at $38.

The play will run until March 11, and I recommend reserving your tickets ahead of time since seats fill up fast.

2018-02-27
Previous Post: e-Textbooks are Safer for the Environment and Save Students Money
Next Post: UCCS Mock Trial team competes in regional tournament