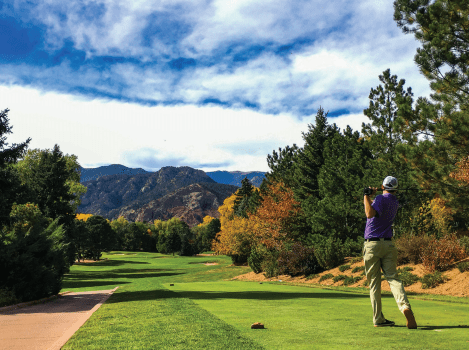 By: Hannah Harvey
In: Sports & Recreation

You can find out a lot about a person through details – their mannerisms, the way they speak, their favorite sports. But you probably didn’t consider how their golf swing helps them handle life’s trials.

“You learn a lot about a person on a golf course and how they handle risk,” said senior business major Ryan Jolette, a level-three student in the PGA Golf Management Program.

The tournament started at the Country Club of Colorado on March 17 and will end at 8 p.m. on May 12.

The tournament series is open only to PGA Golf Management students.

“The program gives students the opportunity to get to know each other and build comradery.”

Students get firsthand management experience as they organize and play in the tournament. Sophomore business major Matt Weiss is serving alongside Jolette as assistant tournament director.

“Running the event, you are expected to host the tournament. It’s really helpful (for experience); you get your feet wet,” said Weiss.

Jolette and Weiss were elected by the PGA golf student body, which is made up of 64 students this year, to run and organize the tournament series.

“The tournament program can be challenging, but this gives hands-on experience for students in their internships,” said Jolette.

“Playing practice rounds are not like the real tournament; I played in the 70s to 80s during practice, but played a 99 in the first tournament.”

All PGA golf students must participate in a series of tournaments each semester as required by PGA, according to Jolette. This tournament series will act as the qualifying event for the Jones Cup Invitational, a national championship that 19 schools with a PGA Golf program participate in.

“The game can be approached as analytical and down to the numbers. I’ve played it all different ways; it’s about the perspective,” said Scott.

Tournaments have been conducted every year since 2003. With about 15 tournaments per year since, the program has held 250 tournaments in total, according to Mark Bacheldor, internship director for the PGA Golf Management Program.

Students run and organize these events and place first, second and third place and have a chance to earn PGM credit.

“The tournament models the PGA professional life. That competitive itch never goes away; we train that early,” said Bacheldor.

“The competitive edge makes the games better and pushes the program to evolve,” said Jolette.

Students get some experience playing under pressure, according to Weiss.

Jolette and Weiss do not expect to face any challenges with the Spring 2017 Tournament Series, but past tournaments have been cancelled due to issues such as inclement weather. According to Jolette, students had to cancel nine holes at the Kissing Camels Golf Course last year due to weather conditions.

“We’ve had snow during September tournaments. If (the snow) happens to fall on a Friday, that’s just the nature of it,” said Bacheldor.

2017-03-22
Previous Post: SGA elections postponed due to high number of complaints, appeals
Next Post: Concealed carry should be limited to law enforcement, not allowed on campus