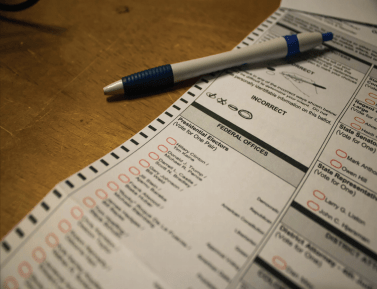 SGA elections postponed due to high number of complaints, appeals

On Pi Day, students who walked through the University Center would have been offered a free slice of pie if they voted in the student government elections the week of March 13.

On March 12, sent on behalf of vice chancellor for Student Success, Sentwali Bakari, it was announced to students in an email that SGA elections have been postponed indefinitely, so that the office of the vice chancellor has time to look through concerns filed against the election commission and candidates.

SGA elections have not been postponed in the last 10 years, according to Sabrina Wienholtz, director of Student Clubs, Organizations and Leadership.

Bakari said the postponement was a result of informal complaints received by the election commission and formal appeals sent to him two days before the election.

“The primary reason is that I received several appeals from candidates, wanting me to review what they considered concerns about potential violation of rules and policies,” said Bakari.

“As a result of that, receiving formal appeals, it takes some time to carefully review and think them through. I’d rather caution on the side of pausing for a moment to review carefully, whether some people would agree or not. Hopefully folks will understand that I took the time to review carefully the concerns.”

One concern that received merit said that a candidate was using the athletic mountain lion logo on their campaign materials, which is not allowed according to the SGA election policy. The candidate was asked to remove the logo.

One of the complaints that did not receive merit from a candidate was that another candidate was making mean statements about the other person.

“I made an announcement to several candidates that you should be ethical, they should be nice to people throughout this process. I can’t police what people say.”

Monson and Bakari said that two official complaints were sent to the the office of the vice-chancellor for Student Success.

According to presidential and vice presidential candidates Devon Johnson and Patrick Calhoun in an email, one complaint denied by the election commission that was emailed to the vice chancellor as an appeal stated that candidates Joey Viyjam and Kennedy Watson should be excluded from the campaign due to a procedural violation.

In the email the appeal read, “My campaign and the campaign that joins in the argument (presidential and vice presidential candidates James O’Brien and Ashley St Clair) would state that failing to submit an application prior to the deadline displayed on all of the ‘Call for Candidates’ material is a procedural violation.”

Candidates O’Brien, StClair, Johnson and Calhoun also said that SGA was being biased toward specific candidates.

Johnson and Calhoun said that the SGA Facebook page liked a comment posted in reaction to a video on its page that stated, “That time a guy who had to step down from SGA because he was about to be impeached runs for Student Body President…what a joke (In reference to Johnson).”

“(That is a) perfect example of an SGA member who is not acting in a respectful way on Facebook and being cordial,” said Monson.

“I was not happy when I saw that, because I think it reflected very poorly on our organization, so things like that, I absolutely do not appreciate.”

“I hope that my address to the Senate kind of clarified what is appropriate and what is not appropriate to do, especially in the SGA office, Facebook and Instagram, and some of our members needed that clarification.”

“Unfortunately the damage is done. It’s important for us to move forward and make sure our SGA members are acting appropriately,” said Monson.

Bakari hopes students understand that this decision was made in the best interest of students and SGA.

“The university is exercising leadership on behalf of students. We would not by any means, interfere with the role and responsibilities of Senate, however I think we are compelled to provide student development, student leadership, be a role model and provide an example,” said Bakari.

“I do respect Sentwali and he absolutely needs the time to look over these concerns. The candidates deserve that time, deserve to be looked over by Sentwali. I told that to him, ‘I absolutely respect what you’re doing,’” said Monson.

Tension is high during elections because it’s a competitive and short process, Monson added.

“There’s a lot of components as to why the election is the way it is right now. It’s not any one person’s fault, we’re students still learning.”

Bakari believes student government’s role is to serve as an advocate for all students.

“(The role of student government is) to provide leadership on student-related matters that impact and have an effect on students. Their job is to make sure they’re functioning within their mission, their values and guidelines and take their role and responsibilities very serious and advocate on behalf of student concerns,” said Bakari.

According to Monson, student elections will tentatively be held April 10-14 where students will be encouraged to vote on Mountain Lion Connect in various locations across campus.

Bakari said that he will announce the new election date during the week of March 20, before students leave for spring break.

Tables will be set up from 9 a.m. to 4 p.m. in the University Center and various locations on campus for students to vote.

One of these days, free pie from Boonzaaijer’s Dutch Bakery will be given to students. Students can also receive T-shirts, stickers and candy.