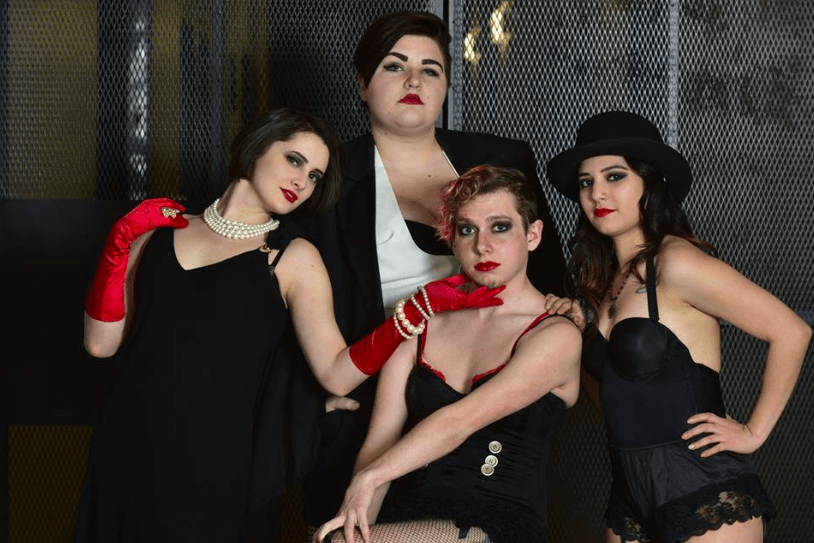 Theatre serves as a way to entertain students in the midst of their daily lives.

But theatrical productions can also send a powerful message, which is exactly what the UCCS Theater Company’s production, “Cabaret,” did this spring.

The production, which portrayed life in Weimar, Germany before the Nazi regime took control, is nominated for the Make ‘Em Sing and Make ‘Em Think awards. The winners will be announced Oct. 17.

“This being an already deeply thoughtful play, we just brought it up to date, making the audience feel like this could be a club they could see in Colorado Springs right now,” said Kevin Landis of “Cabaret,” director of the Visual and Performing Arts and the Academic Theater program. Landis sees the nominations as important recognition for the UCCS Theater Company and a confirmation that they are heading in the right direction.

“The PPAC awards are dominated by professional theater and arts companies. I think that seeing our name up there for an award next to Theaterworks and the Fine Arts Center kind of gives validity to that,” Landis said.

The original “Cabaret” dealt with multiple political issues during the pre-Nazi era and pushed the boundaries of contemporary theater and social norms, according to Landis.

While it was important to be cautious in not directly comparing the Nazi regime to the current administration, Landis wanted to push the boundaries and draw similarities in the political anxiety many people felt then and now.

“There was a lot of turmoil over this recent presidential transition and what it meant for this country. At the end of ‘Cabaret,’ it ushers in a very horrible regime,” he said.

“We weren’t necessarily making that leap, and certainly it is not on par with Weimar, Germany, but we were saying that there can at least be some comparisons in the feelings of an anxious populace in America, on all sides of the political spectrum.”

Sexual identity and individuality were highlighted in the play as well, which was a decision that Landis believed made the play more relatable and relevant to today.

“There are a couple of gay characters [in the play], [and] my vision of the place was sort of an underground club that is certainly queer/gay friendly,” he said. “It made sense to have a community that might feel ostracized today, being center-stage and feeling free.”

The production also presented a learning curve for many of the student actors. Senior theater major Jareth Spirio played Nazi soldier Ernst Ludwig. Spirio, who was raised Jewish, said that the role was interesting as he examined his role from the point of view of a Nazi soldier.

“It was a very eye-opening role because I firmly believe, quoting Alan Rickman, you can’t judge a character if you are going to play him,” said Spirio.

“It was super interesting coming into this role now and looking at it from the other side. I’m not defending the Nazi’s in any way, shape or form, but understanding that a lot of them were just young men thinking they were doing what was right for the country is a new perspective that’s not often explored.”

In the last Saturday performance of “Cabaret,” Spirio’s temple came and viewed the show, according to junior theater major Alexandra Lewis, who portrayed Sally Bowles.

“There was a man in the front who I could see was thoroughly enjoying our performance, but as soon as we got to the end, he was bawling his eyes out and all of us on stage started crying. It was heart-wrenching,” said Lewis.

According to Lewis, the nominations show how theater can be a tool to send a message.

“[Being nominated for these awards] shows how powerful the theater can be. Our whole cast who worked on this show is being honored with this award. It brings a light back to the people that were affected by the Holocaust and WWII,” she said.