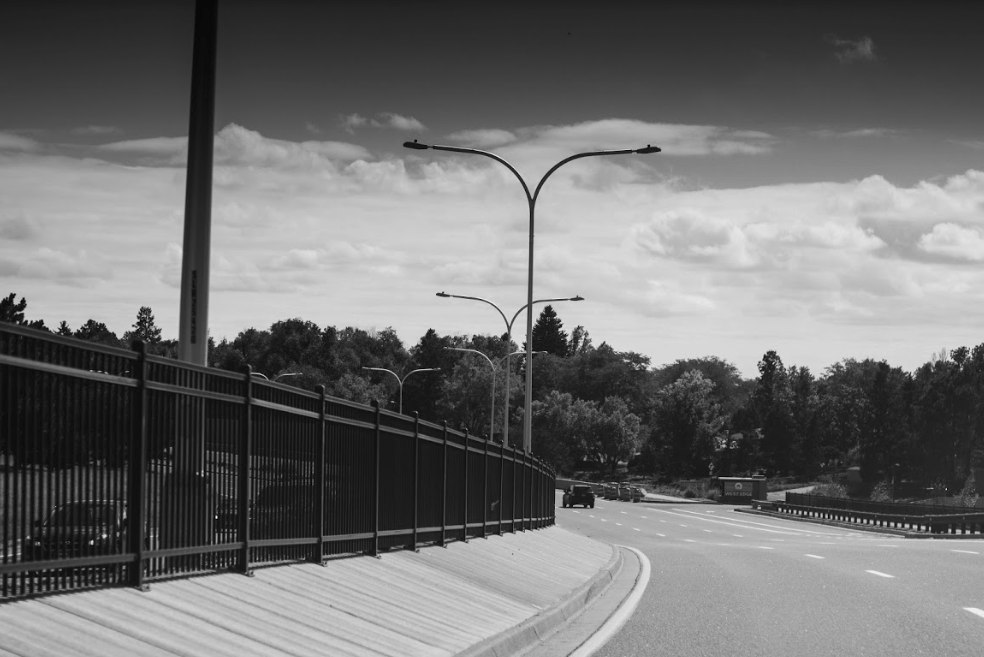 This summer, students traveling along Austin Bluffs Parkway may have noticed a new addition to the road: a fence.

Gilbrane Development Company, the developer who built the West Edge student apartments across the street from UCCS, installed a fence along the Austin Bluffs median and a cement barrier between the sidewalk and the street to address a concern of increased pedestrian traffic.

As West Edge, the new student housing facility located across the street from UCCS, neared closer to their move-in date of Aug. 20, UCCS and the city of Colorado Springs expressed concerns that an increase in student residents would increase this traffic to the developer.

The contractor for the development installed a fence along the median of Austin Bluffs Parkway and a cement barrier between the sidewalk and the street to address this concern.

“The fence was shown on our development plan, which was approved by City Council in November 2015,” said a representative from the development company in an email.

“The contractor for the project installed a fence along the median of Austin Bluffs and a cement barrier between the sidewalk and as required by the project plans and City approvals.”

The fence along the median is matched to the West Edge property line, a clear message that students are not permitted to cross the street unless there is a crosswalk. Everything between the West Edge sidewalk and UCCS’s sidewalk is managed by the city of Colorado Springs.

Jessica Mancuso, property manager for West Edge, emphasizes the impact the fence has had on the amount of students illegally crossing the street.

“I believe that the fence does help minimize students from crossing Austin Bluffs,” she said. “Without the fence, there would be no major deterrent.”

For some West Edge residents, like junior theater major Jenna Romero, the fence is not doing enough.

“I still see students jaywalking, but the fence has cut down on how many do it,” she said.

“I haven’t heard of stories of kids being hit doing it, but if they keep it up someone will die being careless.”

However, the fence does not seem to pose a major concern to the university or West Edge at this time. UCCS and West Edge both want to take an educational approach with enforcing the jaywalking laws and informing students of the risks involved with illegally crossing the street.

According to Mancuso, West Edge addresses the fence’s purpose in tours given to potential residents and encourages students to continue to travel safely from the apartment complex to campus.

“We encourage our residents as well as all of the UCCS students to continually use the crosswalks on either side of our community,” said Mancuso.

“We address this in all our tours as a point of reference when students decide to live at West Edge. The safety of all students is a major priority for us.”

Marc Pino, chief of police, believes the fence is achieving its purpose.

“Most people are following what they are supposed to do,” he said. “The fence has been enough of a deterrent that they are walking up to the light.”

Currently, UCCS’s department of public safety does not believe the influx of pedestrian traffic in the area is a major concern.

“We are working our way to enforcing the rules for jaywalking but so far we are just keeping an eye on it,” said Pino. “It hasn’t been what my initial concern was which is that everybody would just walk out of West Edge and cross the street”.

The university also believes the fence and concrete barrier are necessary to deter students from illegally crossing the street.

“In order for us to enforce jaywalking there either has to be a sign or an obvious barrier,” said Pino.

There are no plans to extend the fence beyond where it is at this time.