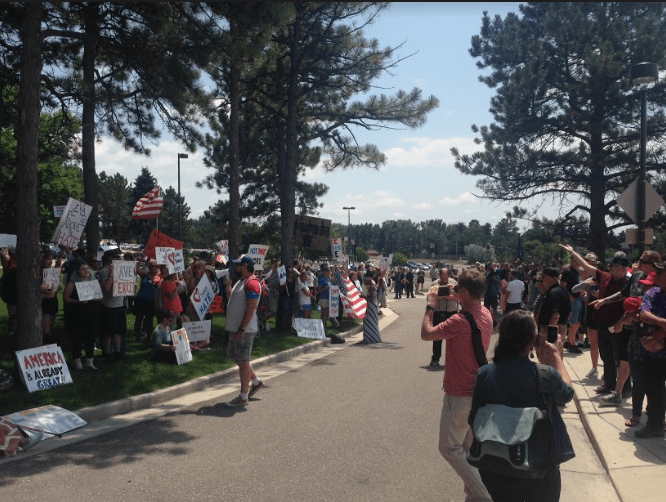 Political involvement low among young adults, should be educated for November elections

In the Sept. 26 issue of The Scribe, we published an unintentional error with the incorrect republican and democratic logos next to the respective party’s candidate on the front page.

Admittedly, it was embarrassing, and it should have been caught before it went to print.

But only two, maybe three students reached out to ask why the photos were incorrectly placed.

It could be that other students noticed this mistake and didn’t feel the need to point it out, but most people were not caught off guard (with an exception, we’re sure, to the political science department).

Although we did not intend to misplace the republican elephant and the democratic donkey, we thought of a greater issue than this small mistake.

As busy students, and arguably American society as a whole, we typically only seem to care about voting when we’re choosing or re-electing the next U.S. president.

There is only a little over a month left before Americans vote for the next president, and it seems that we know more about the scandals circulating the internet and TV than we do the candidate’s stances on policies or what will be on the Colorado ballot this November.

As residents living in or near Colorado Springs, this is alarming. Many of us either don’t know or completely understand what we’re voting for that could completely change our city and state, and the way it functions.

It’s good that we have political groups on campus that are active and students can join to learn more about candidates in the running.

But when we look at other, perhaps larger universities, political activism among UCCS students seems rare.

The amount of people waiting in line at the Donald Trump campaign rally, held in Gallogly Events Center this summer, was equal to almost half the population of students at UCCS.

But the majority of people in this line were not students.

This was also the case for the large crowd of protestors holding signs outside of Main Hall during the rally.

Regardless of the candidate we support, it’s important to pay attention to events like these. The fact that so few of us attended a politically historical event on campus is sad; we did not show interest in at least being informed of who we’re voting for or against.

We can all afford to do better in educating ourselves on the most important decision we will make this year.

Maybe its hard for us to find the time to care about politics, to research the amendments and the candidate’s stances on certain issues.

But this lack of effort is a problem, and the figures on apathy are telling.

The amount of voters 18-29 years old in the 2008 elections were at an all time low, according to Campus Vote Project.

To change this, students and young adults passionate about voting have been seen around campus, making sure everyone is properly registered to vote. We should take time to stop and make sure we can vote on our way to class or on our way home.

We, as a large generation of bright, intelligent young people, need to get out there and educate ourselves. We have the power to determine the outcome of this election, and the way we educate ourselves matters. We cannot be apathetic when it comes to a decision this big.

So, pay attention to your sources. Take some time to learn. Ultimately, it’s our future, and we need to care about it.