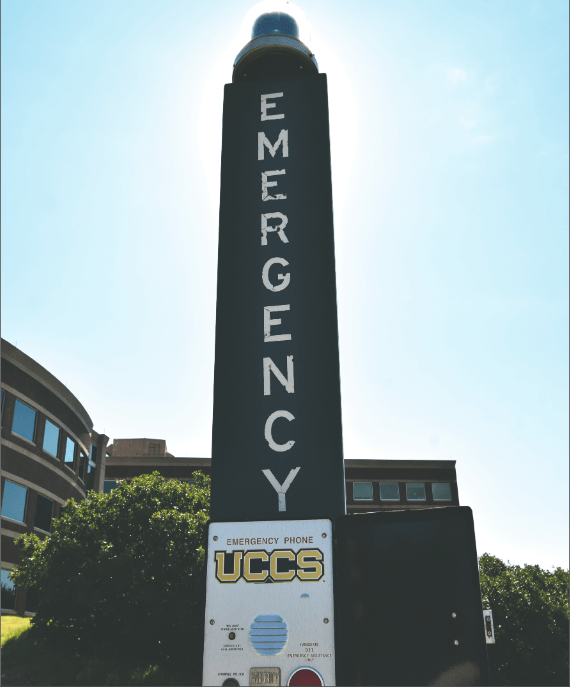 The Public Safety office is gathering information to examine the viability of replacing the campus emergency call boxes with a smartphone app to fulfill the safety needs for UCCS community members.

The initiative is gathering feedback under Chief Marc Pino’s lead. According to Pino, the goal is to initiate discussion and responses from students about their perspective on the effectiveness of the app.

No final decisions have been made and Pino is focused on investigating student interest in the app, and began his inquiry by approaching Student Government Association (SGA) President James “JayJay” Porcadilla, who campaigned on a public safety improvement platform.

During the SGA election at a candidate open house, Porcadilla stated that his goal was to increase the number of emergency call boxes on campus.

“We think it’s a great idea,” Porcadilla said. SGA wanted to make sure that there would not be any potential difficulties with the app, and that the cost of removing the emergency call boxes would not outweigh the benefit that the app would provide.

CU Boulder replaced their call boxes with a public safety app according to Pino and faced minimal success after only 200 downloads from their 30,000 student population.

Pino said that he believes that campus police are successful at reaching students through their outreach endeavors and UCCS has other avenues to communicate the app.

In the initial discussion at the first Student Government Association meeting of the year, Pino said that there are 54 boxes on campus and that the costs of maintaining all of the call boxes every year is about $18,000 compared to the annual cost of $5,000 a year for the app, cutting costs by $13,000.

In a study done regarding the call boxes’ effectiveness, it was found that the phones were only used once and by someone who was not a student at UCCS. All other calls made were “hang-up” calls that campus police determined were caused by storm interference or wildlife.

The app, known as Rave Guardian, contains features such as the ability to send confidential tips, an emergency call button and a safety timer, which allows the user to input a time it takes to travel from one point to another, such as from a classroom to a car.

With this feature, students can disable the timer once they have arrived at their destination, and if the timer goes off before the student disables it, campus police will be notified and would send someone to check on the student.

According to Pino, the plan is to purchase this app from Rave and make it free to use for all students, faculty and staff.

Pino said that when a call from a box is made, it directs police response to that call box and not necessarily to the caller. The difference would be that the person who initiated the call could no longer be at the box when fleeing a threat, while a smartphone’s GPS can be used to locate the caller and communicate it to the responding officer.

The app would require access to smartphones with an active data plan or Wi-Fi connection, and Pino said that students will still be able to call 911 to receive help from campus police.

Pino said that the campus Wi-Fi expansion from this past April helps students maintain Wi-Fi connectivity.

The app would better serve students with accessibility needs according to Pino because of its ability to text with campus police.