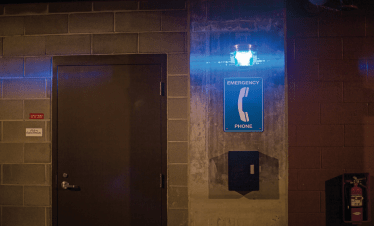 The last email students received labeled Timely Warning was one year ago when a robbery occurred close to the UCCS campus.

But on March 14, students received a Timely Warning email from campus police about an alleged incident involving a student and a suspect near the Roaring Fork building. The student reported “being grabbed from behind by an unknown male on March 13, 2017 at approximately 8:50 pm.”

The incident did not involve an unknown person to the student. There is no threat to the campus community as it relates to this incident,” read the email.

The student originally reported being grabbed from behind walking from the Alpine Field garage.

Public Safety usually sends one or two timely warning emails per year, according to Marc Pino, Chief of Police.

Through investigations, viewing Alpine Field camera footage and tracking movements of the suspect, Public Safety was able to determine that the incident did not occur on campus, said Pino.

“It did not happen on campus, but what was alleged was reported to have occurred off campus,” said Pino.

“Typically what we see with victims of trauma, is that they often don’t remember things in a set order. Normally you would think about things in terms of A, B, C, D…(but) D might be first, then B, A and C.”

It is important for students to be aware of their surroundings and to walk in groups, according to Pino.

Public Safety also offers a safety escort to students and faculty who ask for someone to walk with them or give them a ride to their destination.

Safety escort requests increase when the weather is colder, according to Pino.

“Typically it’s a situation where it’s kind of a convenience. And we’re more than happy to do that. In terms of times they’ve felt threatened, it’s tough to say (how many students request a safety escort). But not often.”

“This is something the campus sees a lot,” he said.

“If the person comes in after them, they can let an RA know. If the student thinks they don’t really belong there, call us, we’ll come out. It could be someone who lives on the floor and hasn’t been seen in a while. We’d rather check it out,” Pino said. “If they find a door that’s propped open and they see a rock, remove the rock.”

2017-04-03
Previous Post: Fuel your body with wholesome foods; try Modern Market next time you need a quick bite to eat
Next Post: Low student attendance at games needs to improve, we need to support our athletes