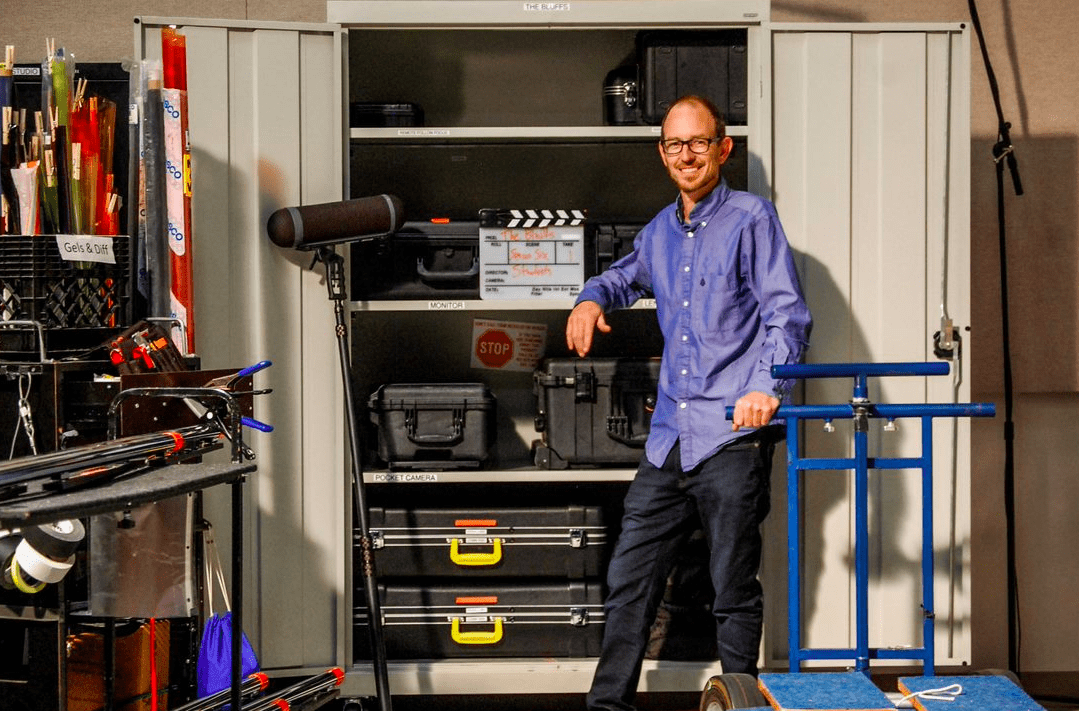 Season six of ‘The Bluffs’ in the works, set to premiere spring 2020

By: Tamera Twitty
In: Features

Season six of the UCCS student-produced TV/Web series “The Bluffs” follows two students who used to be best friends, and each possess half of the treasure map left behind by Butch Cassidy, a U.S. train robber and bank robber. As the show progresses, the race to the treasure intensifies and so does the relationship between the ex-friends.

“It’s long been rumored that in 1899, Butch Cassidy, after robbing the Colorado and Southern Railroad of 100,000 dollars in gold coins, and while on his way back to Wyoming and his hole in the wall hideout, Butch stopped in Monument, Colorado and buried the gold. He drew a map to give his newborn daughter, so she could dig it up when she was older,” said Department of Communication chair and executive producer David Nelson.

“As it turns out, he actually buried it about a half-a-day’s ride south of Monument,” Nelson continued. “The picture slowly turns into color; the camera pulls back revealing that he was actually on the bluffs and pulls back further to show UCCS.

Season six of The Bluffs was written by students in the spring, and a mostly new team of students will be a part of shooting this semester.

The role of the students in the production of The Bluffs cannot be understated; in fact, all three episodes will be directed by digital communication students Galen Westmoreland, Joshua Moore and Joseph Celestino. The Bluffs is written, lit, recorded, designed and shot by the students in a year-length process in communication courses 3000 and 3010. However, non-comm students can get involved in several ways. Both COMM 3000 and 3010 can be taken as upper division electives. Any student can audition to act in the show, as well as volunteer on set.

“The first two classes this semester are focused on pre-production,” said instructor of the class Jeff Dempsey. “And basically, pulling the story apart to discover all of the elements, the locations, the props, casting, etc.”

There are generally 13 days of production on the show over the fall semester.

“It’s definitely a lot to do in such a short amount of time,” Dempsey said. “Directors will also tend to have call times at 6:30 to 7 a.m., because it’s only a five-hour class. It’s actually two classes put together, like a lecture and lab.”

“Next spring, the postproduction takes place. That’s the editing,” Nelson said. “It has to be edited together, there has to be music. We actually work with music composition students who will hopefully write some of the music for it.”

In fact, most previous seasons had original music composed by students for the show.

“It’s going to be a lot of fun, [filmed at] lots of locations around the campus. [The characters have] to track down clues and figure out what things mean. It should be a really good season,” Nelson stated. Last season, The Bluffs took a more sci-fi direction with the plot. This prompted the production team to include special effects that the show had never attempted before. Season six is a mix of western and detective noir.

“It will not be as special-effects heavy this year,” said Nelson. “It was a lot of work and a lot of stress.”

Over the years, The Bluffs has accumulated thousands of views online and won awards. Last year, the show bagged its first silver honor award for season three in the Telly Awards. This season, viewers can expect the team to continue to push the envelope of what is expected from student productions.

“This year it will hopefully be a really neat year, because of the ‘back in time’ element,” Dempsey said.

If you are interested in volunteering or being a part of the production process, reach out to David Nelson at (719) 255-4129 or [email protected].

2019-09-10
Previous Post: Voices of UCCS: Incoming Freshman class predicted to be the lowest since 2014
Next Post: REVIEW: IT Chapter Two – Not for the easily scared, or the impatient