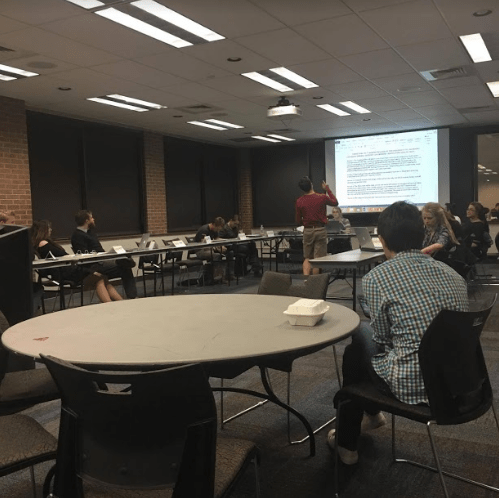 By: Daniel McArdle
In: Uncategorized

In the past couple of weeks, Student Government Association senate meetings held on Thursday nights have heard from interim Chancellor Venkat Reddy, vice chancellor for Student Success, Sentwali Bakari and have continued to approve funds as the remaining budget continues to decrease.

In the March 10 senate meeting, SGA approved funding for the Modern Engineering Society, passed SR-06 and did not pass SB-24.

Speakers, which included members of the SGA and the senate also discussed the upcoming student government elections and the importance of current SGA members not interfering in the election process.

Wang demonstrated a battle robot he designed and built during a robotics class last semester.

According to Wang, the group hopes to host a battle with the completed robots in a 76-by-76 foot arena for UCCS students. After the spring event, the group will keep the robots for repeated outreach demonstrations of student robotics projects.

The senate unanimously voted to approve the BAC recommendation allocating $576.37 for building supplies and event support.

Swasey died in the line of duty when he responded to a shooting at a Colorado Springs Planned Parenthood center in November 2015. He was a six-year veteran of the UCCS police department and one of three people killed in the shooting.

Senators also passed SB-23 to provide funding for catering at the March 11 Professionalism for Dummies event. Catering was purchased before the senate approval. The bill allocated $1,066.88 and passed with 11 votes.

The bill, which did not pass in its current form, would have also funded a Tesla coil concert. The bill was also intended to honor inventor Nikola Tesla, who performed many of his most famous experiments in Colorado Springs.

Senators were concerned that the proposed $8,100 request was nearly 25 percent of the remaining budget, but they plan to reintroduce the bill to provide for fewer coils and reduce total costs.

Monson stated that she is disappointed and disgusted that members of SGA have been involved in contributing to making inappropriate statements against SGA candidates.

“This behavior is unprofessional and unfair, and quite frankly is making it difficult for me to run this election. I am coming before you today because I care about this government and the future of this organization and I want to believe that you do too,” she said.

“Making inappropriate statements online and in person and especially in the SGA office is not and will no longer be tolerated. This is me making a statement to cut it out. Seriously, I expect that you all know what is appropriate and will make the right decision.”

Senate also discussed whether or not discussing facts is OK if it’s hurtful to people.

Director of Student Clubs, Organizations and Leadership Sabrina Wienholtz asked the senate if the truth is always the right choice.

“Frankly, it’s rumors. It’s stories that you all couldn’t’ possibly know to be true or not that are being perpetuated in this office. And it makes you all look terrible.”

Discussion between SGA and senate members continued as students asked if supporting specific candidates in the election as SGA members is OK or not.

“You are allowed to support a candidate, but if you are intentionally making frankly mean statements about candidates, that’s not what an SGA member should be doing,” said Monson.

“It is making my life freaking hell, guys, I’m serious. Cut it out. I’m mad.”

2017-03-12
Previous Post: A Transgender Journey with Jessica Lynn seeks to normalize stigma surrounding gender identity
Next Post: ‘Logan’ ushers in the end of the ‘Wolverine’ era with unmatched perfection