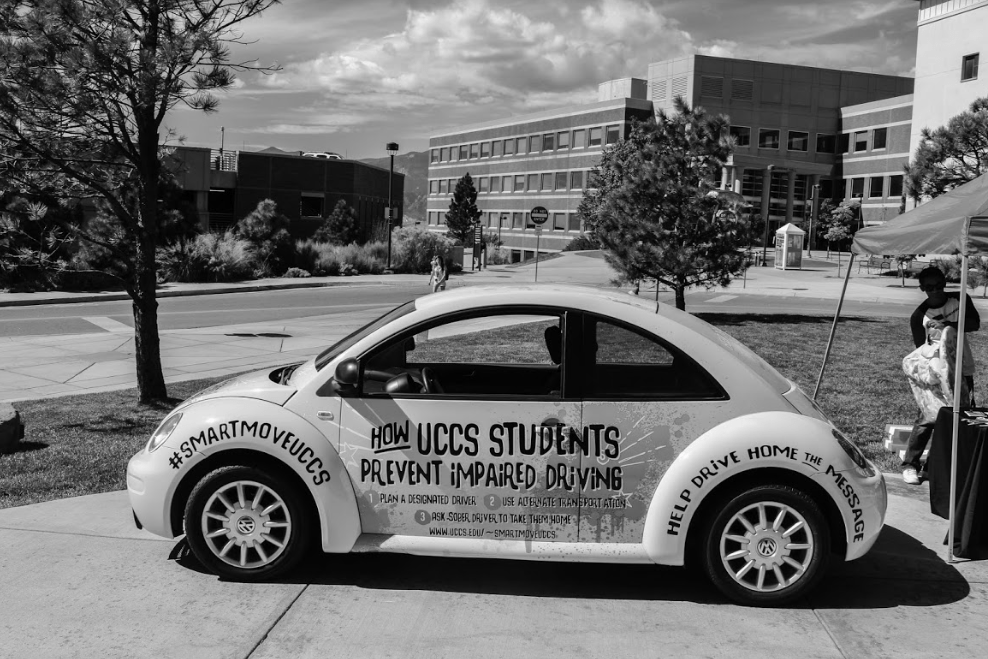 Students might have seen a small yellow Volkswagen bug at Club Fair this year. But the car wasn’t for decoration; the bug serves a cause.

The yellow Volkswagen bug, called the Statmobile, is part of the Smart Move UCCS campaign, which seeks to reduce the number of students who drive under the influence.

The car is covered with statistics collected from a survey that UCCS collected in March. The voluntary, anonymous survey was conducted in class to gauge students’ feelings and perceptions of their own and others’ alcohol use.

The purpose of the Statmobile is to help the Office of the Dean of Students engage with students around campus on impaired driving, according to Steve Linhart, dean of students.

“When we are at a tabling event, whether it is an actual table or the Statmobile, our students and staff will engage students in conversation about alcohol use and impaired driving,” Linhart said.

“The overall goal is to allow students to make positive choices regarding impaired driving and alcohol use.”

According to the survey, 99 percent of students report that they have not been charged with a DUI. Two thirds of students also reported that they take action so they won’t drive impaired.

Further results of the survey will be released throughout the school year.

According to the No DUI Colorado website, a resource for those interested in learning more about impaired driving, 2,220 El Paso County residents were charged with a DUI or DWAI in 2016.

The UCCS 2016 Annual Safety and Fire Report says there were 116 referrals for disciplinary action and 14 arrests following liquor law violations on campus in 2015.

Alcohol is still one of the largest concerns on college campuses in general, according to Amanda Allee, assistant dean of students.
“I think the goal is to help make sure that students have all the facts and information they need to make good choices for themselves,” said Allee.

The Smart Move campaign debuted on campus in August 2016 after UCCS decided to make amends to the zero-consumption approach that has been typical of college campuses for 75 years.

Other campuses have also adopted a more realistic approach to reducing alcohol abuse.

Many students, like senior history and psychology major Tania Reyes, feel that drunk and impaired driving can have disastrous consequences.

“Driving under the influence doesn’t only put your life at risk but also everyone else who is driving,” said Reyes. “Life is short, and one mistake that is preventable could cost someone their life.”

“Knowing the type of outcome that is possible from drunk driving is more likely to prevent the consequences,” she said.

The Smart Move campaign is possible due to a grant funded by the Colorado Office of Behavioral Health and the Persistent Drunk Driver Committee of Colorado.

The PDD Committee of Colorado is a fund created by the No DUI Colorado organization to support the education of young drivers on the danger of persistent drunk driving.

The grant is in its third year and UCCS is the fourth public institution in the state to be a recipient of the PDD Committee’s grant.