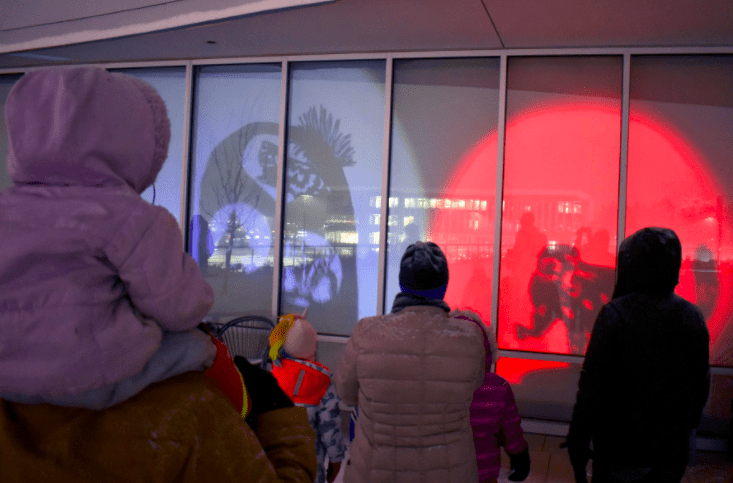 Smitten by ‘The Mitten’

“We want folks to be transported to another world — even just for thirty minutes,” said Katy Williams, puppet director and designer and one of the producers of “The Mitten.” “We all need that escape, especially right now. We want them [the audience] to feel safe, laugh and gasp with awe.”

“The Mitten,” a TheatreWorks production in collaboration with Katy Williams Design and JParkerArts, just finished its final performances at the Ent Center for the Arts.

The outdoor shadow puppet show was a surprising and delightful break from the typical theatre experience.

The performance is based on a Ukrainian tale that has been the subject of several children’s books. The basic plot unfolds when a child loses their knitted mitten, and a variety of woodland creatures discover the mitten before it ultimately makes its way back to the child.

Last Friday, my friend and I bundled up in hoodies, down vests, hats and gloves and walked through the brisk night to the Ent Center to watch the performance.

The audience was broken into smaller groups for public safety reasons, so once our audience group of about 10 people arrived, we were led back behind the Ent Center, through a forest of trees bedazzled with colorful lights.

We all giggled happily like little children as we made our way through the maze from which we emerged and were led to the starting point of the performance.

There were several viewing windows around the exterior of the building, and after each scene, an arrow was projected onto the window directing us to the next scene.

The windows of the ENT Center were covered with paper, and a puppeteer stood behind the window, animating each character, a bright light illuminating the puppets against the window as the puppeteers worked their magic.

The characters were thin, printed, flat, paper-like animals and objects depicted in black and white ink. The images appeared to be moved on sticks or cardboard bases, and the color of the lighting changed to articulate emotion in the performance. For example, as a snake was introduced, the lights turned a sinister green.

In the first scene, we witnessed a little boy drop his knitted mitten in the snow and a soft-spoken, kind chipmunk who made her home in the mitten.

Next, a skunk made his debut, and my friend and I could not contain our laughter.

Whoever voiced the skunk was incredible; his voice was absolutely hilarious because it was very sad and slow. The skunk had self-esteem issues because he smelled, well, like a skunk.

At one point the chipmunk did not want to let the skunk into the mitten because she could smell his strong odor. In his slow, sad voice the skunk said something like “I can’t help it, I was born this way.” The entire audience howled with laughter.

Next, a new animal entered the show: a prairie dog who talked and acted like the Justin Bieber of the forest and who tried to get inside the mitten. His cool lingo and mannerisms were captivating.

More characters were introduced, such as an overly talkative ram and a kind gray wolf.

Each character had a distinctive personality, but the melancholy skunk and prairie dog really stole the show.

While the show was hilarious, the performance had a deeper meaning as well.

By the end of the show, the cozy mitten was overflowing with small and large creatures alike, all living in harmony. The mitten never frayed when the bear or wolf climbed in despite their large size. The animals were all very different (and some might have been prey for others) but in the mitten, they accepted each other and worked together to stay warm on the cold winter night.

But at the very end, when a small swarm of beetles rudely pushed their way into the mitten, the fabric finally ripped open. The message here is that harmony and kindness can be threatened by dissonance, no matter how small.

I see the knitted mitten as an analogy for seeing the best in others — making an effort to get to know someone before judging their character.

Treat both small and large creatures with kindness and compassion because most of us could use another friend, and the best part: you can be a melancholy skunk or a Justin Bieber prairie dog and still spread kindness, making someone’s day a little bit brighter.