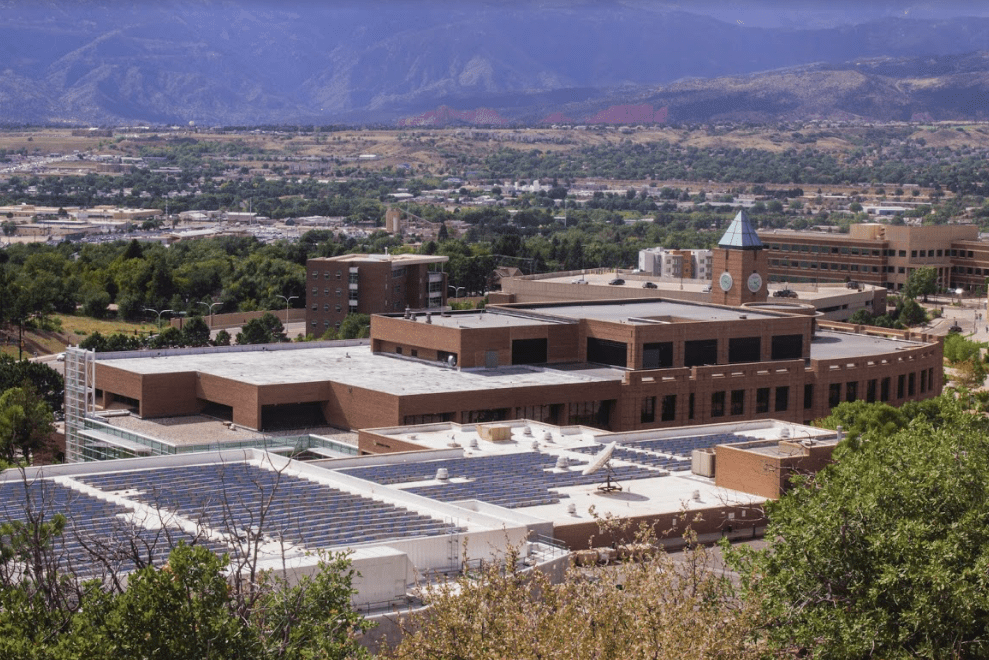 By: Aspen Harris
In: Uncategorized

On Aug. 24, installation of a 182-kilowatt photovoltaic system began on top of the University Center and Gallogly Events Center. The system, which is to complete installation on Oct. 9, is expected to power the buildings with a net-zero electricity bill.

The project cost $300,000 in University Center reserve funds. It will take about 12 years to recoup this investment, according to Jeff Davis, executive director of Auxiliary Operations.

The Gallogly Events Center was chosen as the next site to receive solar power as a result of a collected survey. The newly renovated, large roofs on the building made it a viable choice.

This is the fifth solar power system installed on campus and will not be the last.

Other photovoltaic systems are already installed at the Alpine Garage, Centennial Hall, the Osborne Science and Engineering building and the Gallogly Recreation and Wellness Center.

In 2007, UCCS formed the Climate Action Committee through the American College and University Presidents’ Climate Commitment.

The committee, which is composed of UCCS students, faculty and staff, analyzes projects, such as the solar power installations, and projects a date that the campus could reach complete carbon neutrality, according to the Office of Sustainability website.

“Pursuing solar energy is a significant strategy that is part of the UCCS Climate Action Plan 2010,” said Linda Kogan, director of the Office of Sustainability.

“This plan charts a path for the university to significantly reduce its carbon footprint to reduce our greenhouse gasses and our contribution to climate disruption.”

The committee has collaborated to develop sustainability strategies for the next eight years.

Alongside the solar power installations, other strategies outlined in the Climate Action Plan include reducing energy use through technological upgrades and educating the campus about conservation behavior.

“My opinion is that this is a great project both to save energy/utility costs and therefore keep expenses down as well as show potential students during tours that the university is working to meet our obligations toward the American College and University Presidents Climate Commitment,” Davis said.

According to Kogan, it also reduces our costs in the future as we generate more energy on campus.

Considerations of the amount of energy generated compared to the monthly electricity bill of the two buildings determined the net-zero bill, said Davis.

The installation will at times produce more energy than it consumes. This surplus energy will earn UCCS a net metering credit from Colorado Springs Utilities.

During the nighttime hours, the buildings will use more electricity than is provided by the system; otherwise, generating energy should cover the cost of electricity during these times.

“This is my first year at UCCS, and I always see posters and information about sustainability and ‘going green’ posted around campus,” said Harper.

“UCCS is always trying their best to remain environmentally friendly. So, I think the new solar panel system is a great way to contribute to the ongoing ‘green’ campus. I think it is really great that UCCS wants to help our environment.”

“I have never seen any school commit to keeping their campus environmentally friendly like UCCS does,” said Mireles.

“I can’t wait to see the school’s future sustainability contribution plans and what they may have to offer.”

For more information on the solar installations or other sustainable strategies, visit the Office of Sustainability at www.uccs.edu/~sustain/.