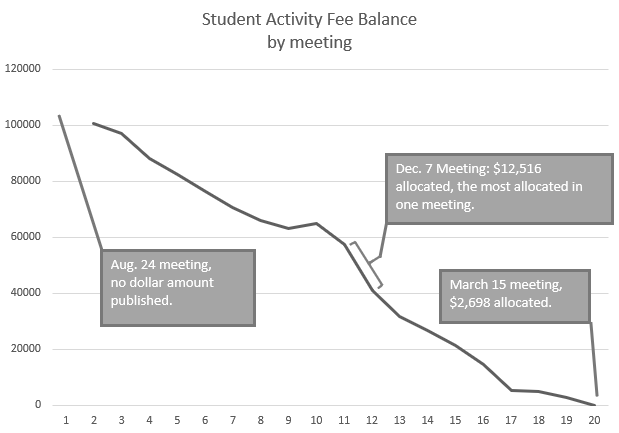 The last of the Student Activity Fee was allocated at the SGA Senate meeting March 15.

Over the last 20 meetings, over $110,000—the sum of the Student Activity Fee as of August 2017—was granted to clubs and organizations that applied for funding through the Budget Advisory Committee.

At the end of the March 15 meeting, $2,698 was allocated to two clubs through majority vote.

“While (the money) is technically all allocated, there is a chance for more funds to be reestablished,” said Holly Moershel, SGA director of finance and senior finance major.

The Carry Forward Fund, money left over from the last school year to be used this year, is also depleted.

Moershel explains that if clubs that have been granted their funding requests, and if that club does not use all the allocated funds, that remaining money will go back to SGA to fund more clubs.

Moershel said that there won’t be any club funding proposals granted “unless we get any of the returns.”

Of the 79 funding proposals with reported voting records that were passed by the Senate, 46 of them were passed unanimously, with the rest of the proposals having an average of two votes against.

Only one recommendation did not pass on the Senate floor, which tied the vote at five for, five against.

The Budget Advisory Committee is responsible for recommending these funding proposals to the Senate. The BAC meets every Tuesday to hear club proposals, to amend proposals to better fit the funding guidelines and to send that information to the Senate to make their decisions.

Around this time last year, SGA had an estimated $32,400 to allocate to clubs and legislation, according to a Scribe article published March 14.

According to Moershel, next year’s budget lies around $320,000, which is higher than the budget this year. Moershel cites increased student population as the reason for more funding.

However, the second half of March is where the larger organizations on campus propose prospective budgets for the next school year, which can take up around $200,000 of the total budget.

The BAC is still accepting club funding proposals, but there are clubs currently in line to receive funding when more money is returned.

Clubs can apply for up to $3,000 of the fee money remaining after larger funding proposals are subtracted.