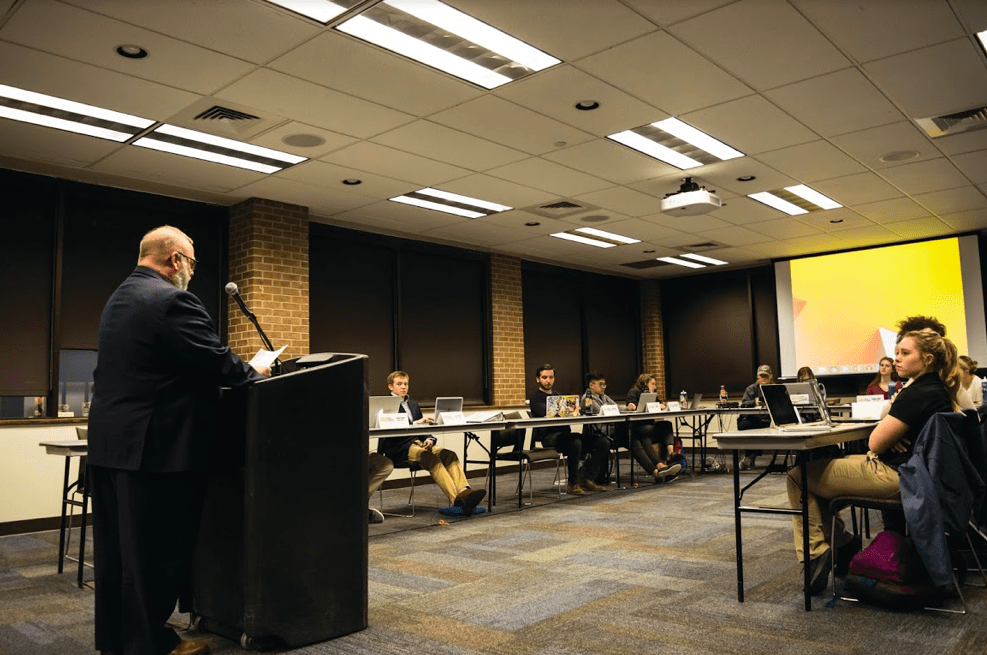 The Student Government Association passed SR02: The PROSPER Act by a 12-0 unanimous vote at the March 15 senate meeting.

According to Stephen Holmes, senator of Letters, Arts and Sciences and co-author of the resolution, SGA is opposing the PROSPER Act due to its negative impact on low-income and first-generation students at UCCS.

Due to the PROSPER Act, “the potential increase in student loan debt will discourage low-income individuals from the pursuit of higher education,” according to the resolution.

Vijayam has consulted student government leaders across the CU system regarding the effects of the PROSPER Act, along with UCCS students, including Kyle Gruenhagen, president of the Graduate Student Association.

“This is something that is on the radar of all the presidents on the CU campus. It’s something we’ve been discussing and doing research on,” said Vijayam.

While the bill passed the House Committee on Education and the Workforce in December 2017, it has not yet been passed through the U.S. House of Representatives or passed into law.

The act would cut $14.6 million in financial aid over 10 years, according to the Congressional Budget Office. At UCCS, 73.8 percent of the student body, which amounts to 8,875 students, take out financial aid, according to Jevita Rogers, senior executive director of Financial Aid, Student Employment and Scholarships.

The bill would also cut subsidized loans, which do not accrue interest while a student is attending college. Students who demonstrate financial need are eligible for such loans. However, the PROSPER Act seeks to only include unsubsidized loans. Interest would accrue while the student attends university, according to U.S. News.

At UCCS, 4,482 students take out subsidized loans. The PROSPER Act could factor into a low-income student’s decision to attend college, making the affordability of pursuing higher education uncertain.

“What we see is that doing away with subsidized loans and forgiveness programs could create a barrier on low-income students as they look at school,” said Holmes.

On March 9, CU leaders, including Reddy, CU president Bruce Benson and the three other CU campus chancellors, wrote a letter expressing their opposition to the act as well.

“We are discouraged to see the legislation pare back essential federal support… which prepare low-income and first-generation students for college,” states the letter.

Chancellor Reddy is opposed to how the bill would disproportionately impact low-income and first-generation students at UCCS. Of the total student body population, one third is estimated to be low-income, according to Reddy.

“In the age of technology, it is evermore important to help educate our population. The more students we can get through college, the better prepared our nation will be to compete at the global level,” said Reddy.

The bill also includes a streamlined way of funneling student aid through “one loan, one grant” in order to simplify the loan process. The bill will eliminate all federal grant programs excluding the Pell Grant, according to U.S. News.

Student borrowers will also be capped on how much aid they can take out due to the proposed ONE Loan, which will replace the Stafford and PLUS loans.

The PROSPER Act limits loan forgiveness by eliminating Public Service Loan Forgiveness, which rids students of loan debt if they take a position in the public sector and make loan payments for 10 years, according to the Washington Post.

“If you want to pursue a graduate degree, you won’t be allowed any work study funds,” said Vijayam. “It affects people who want to pursue higher education, and it affects low-income students from all backgrounds, and that’s why I’m against it.”

Vijayam and Holmes encourage students to reach out to SGA with concerns regarding the PROSPER Act.