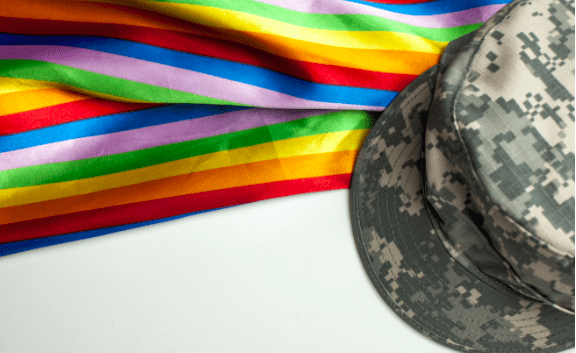 On Sept. 20, an event hosted by the MOSAIC and the Veteran and Military Affairs Office celebrated the 10th anniversary of the repeal of “Don’t Ask, Don’t Tell” and gave students the chance to hear first-hand accounts of the effects of systemic discrimination.

While initially set up as a celebration, the event turned into a chance for students and community members to share their experiences. This created a valuable learning opportunity for people who may not understand the persecution felt and still experienced by the LGBTQ+ community.

The event had multiple speakers, and the organizers opened the floor up to the audience to speak about their personal experiences. Bret Kendall, a sociology graduate student, shared his experience being openly gay while serving in the Marines.

“If you were gay but acted very masculine, you were okay. But if you started to add a little femininity into your style, or the way you talked, then you were kind of beaten back into the idea of masculinity,” Kendall said.

“I think that the repeal was great. But for me, serving after it ended, there are still a lot of cultural problems. … As a nation, and as a unit in the military, we need to [keep asking], ‘How is the culture still keeping those toxic structures in place?’”

Mitch Meler, a junior business management major, spoke of his experience of being deployed as a closeted gay soldier before the repeal.

“It was so scary. Not just the fact of being deployed, but also thinking that I could be outed,” Meler said. “Even more so when I got back…I was so scared to tell anybody. I had a separate life entirely.”

Mike Hamilton, student engagement and programs coordinator for Military Affairs, shared his personal experience with “Don’t Ask, Don’t Tell” with a moving story about a fellow Marine discharged for being gay. Hamilton spoke of his frustrations regarding the policy that allowed a picturesque Marine to be discharged simply for his sexual preferences.

Alisha Meyer, outreach and programming graduate assistant for Military Affairs, said her favorite part was “[hearing] different perspectives and hear from students that have actually gone through ‘Don’t Ask, Don’t Tell’ or coming in right after that; their experiences was just really moving.”

Director of MOSAIC and the LGBTQ+ Resource Center Whitley Hadley spoke about embracing instead of erasing the differences we see in each other. Hadley ended their section with a call to action. They encouraged us to ask ourselves, “What choices are you making today to ensure your neighbor gets to live freely, bravely and in a society they can truly participate in?”

Choosing the MOSAIC Center as the venue for the event provided a comfortable atmosphere that felt more like a discussion between friends than a disconnected lecture. In addition, the limited turnout added to the personal feel of the event, allowing others to feel comfortable enough to share personal experiences.

Since the organizers primarily marketed the event as a celebration of the repeal, they offered snacks and games after the speaking portion to build community. They implemented a last-minute change in focus and canceled the celebration side to draw more attention to the speaking section.

Regarding the decision, Hamilton said after the event, “It didn’t seem to fit, it just seemed disconnected. It was like, ‘You went through something really personal, and really traumatic and really hard in the military, and you were mistreated: Let’s go play cornhole outside, we have Cheetos.’”

The educational aspect gave pertinent background information, and the organizers avoided turning the event into a lecture. Instead, they created a balance of informative content and personal experiences.

All in all, I felt the event was a success in building awareness and community, all while providing an invaluable learning opportunity that one can only find from personal experience.