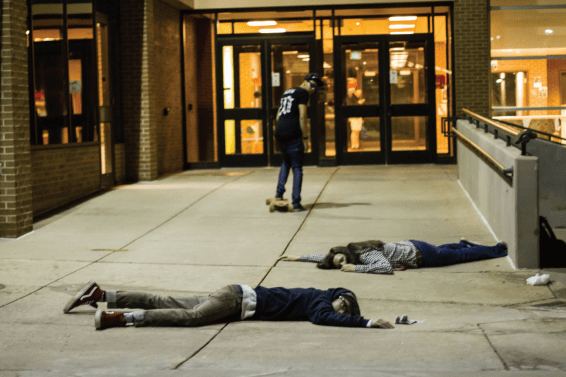 By: Polly Ester
In: Life on the Bluffs

While the sunshine and warm spring weather has been enjoyed by many in Colorado, it is feared by students on UCCS for what happens when snow is no longer on the ground.

This year, students, faculty and staff on campus are afraid of what they never thought they would be: longboards, leather jackets and crew socks.

The Tarmac Weazl Riderz, a long boarding gang that started as a club at UCCS in 2001, have been reported for 28 hit and runs on campus since the fall semester, according to chief of police Park Mino.

On March 28, while walking from Centennial Hall to his dorm in Monarch House, freshman communication major Bill Loney was hit and run by one of the Tarmac Weazl Riderz gang members.

Loney had his earphones in and was listening to Ed Sheeran’s “Shape of You,” when the attack happened.

The faint sound of the wheels rolling over the cracks in the sidewalk sounded familiarly like the “Jaws” theme song, said Loney.

Two hours after the attack, Loney woke up in a ditch next to the Rec Center; black skid marks covered his khakis and polo shirt.

“The last thing I remember seeing were a pair high-top Vans and Nike socks,” said Loney.

Loney suffered minor injuries, and has to wear a neck brace for two weeks. But the wounds were more than physical.

“I’m afraid to walk out of my dorm; it’s like they are waiting to run someone over,” said Loney.

In 2011, the Tarmac Weazl Riderz started as a student government funded club with local competitions, fundraising and weekly meetings.

Since its start, the club-turned-gang has grown from 13 students to over 1,000 at UCCS, according to their Facebook group.

Previous accidents have left Loney wondering whether or not he should transfer to Colorado College, or to CU Boulder.

“My parents are looking into other options because of all of the reports. I don’t want to move, but at the same time I don’t want to have a target on my back for another three years,” added Loney.

Founder of the original club, Brick Rooster, wanted a group that could bond over their love of boarding, but other members quickly strayed from this mission.

Current president and senior business major Zack Green, commented on the mission of the club.

“I mean, we’re just trying to shred, and if you get in our way, sucks to be you.”

Students who want to join the gang do not have to have previous skate or longboarding experience to be part of the weekly hill-bombings on campus.

Chancellor Sam Mockley-Palaback is working to ensure the gang follows all rules of a student club, but is facing some resistance from the gang.

“I walked into my office a couple days ago and found it completely trashed. There was toilet paper all over my office,” said Mockley-Palaback.

“The best solution would be banning longboards all together, but public safety fears that this would increase criminal activity between members.”

Mino explained that the issue reaches farther than just UCCS.

“Longboarding gangs are the new main issue on a national scale,” said Mino.

According to Mino, a national public safety seminar will take place in which the issue will be looked at in colleges across the country.

“Some problems are rooted in history. The longer we allow gangs like this to survive, the harder they are to annihilate later,” said Mino.

“If this issue had been dealt with back in the 2000s, we would not be dealing with it on such a grand scale.”

Until public safety can ensure all students are safe along the Spine, Mino suggested that students be wary of the gang, and consider staying inside to the best of their abilities when it’s warm outside.

Green and other members of the Tarmac Weazl Riderz said they do not see any issues in what they have been doing. They feel it is students’ fault, that students should pay attention to where they are walking.

“Just move over, it’s not that hard,” said Green.

Students interested in joining the gang can visit their Mountain Lion Connect page, their Facebook page or email Green at [email protected] com.

To report a longboarding incident, students can call Mino at 255-0000.