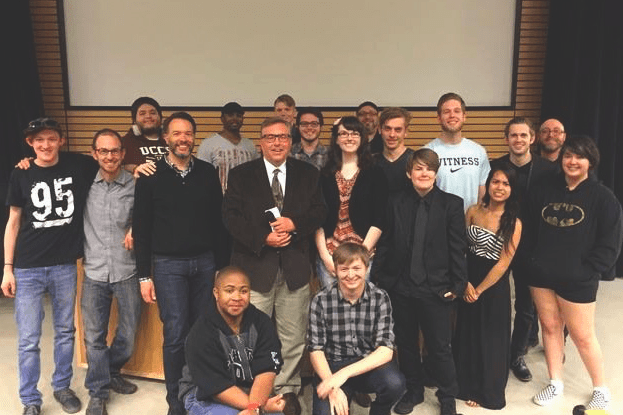 ‘The Bluffs’ season four to premiere at Ent Center

By: Quinita Thomas
In: News, Uncategorized

Season four of “The Bluffs,” a student-produced television series, will premiere on May 1 at the Ent Center for the Arts. This year, the three-episode season follows the story of a fictional UCCS custodian named Jim.

“(Jim) has unfulfilled hopes and dreams but unfortunately, the world is coming to an end, and season four follows him through that journey,” said Andrew Carter in an email, a senior digital filmmaking major that serves as one of the student directors for the series.

“The Bluffs” has been recognized nationally. Season one of “The Bluffs” won an Emmy Award from the National Academy of Television Arts and Sciences for long form fiction in the student achievement category at the 2016.

Started in 2015, students can participate in the production of “The Bluffs” independently or for class credit in the Department of Communication.

“Any students that have an interest in some aspect of producing a TV series (from building and painting sets, to hair and makeup, to making props, to marketing the finished show), we would welcome and love to have that. They could also receive independent study credit if they needed that,” said Nelson in an email.

Students in the Theater and Dance Program have mainly participated as actors for the series. Music and film studies students also participate in composing original music.

“Any students that have an interest in some aspect of producing a TV series (from building and painting sets, to hair and makeup, to making props, to marketing the finished show), we would welcome and love to have that. They could also receive independent study credit if they needed that,” said Nelson in an email.

Carter said that although he had never directed an episode for The Bluffs before, he was chosen for this position based on his vision for the script and his past directing experience.

“I read the script and wrote about what I saw, heard, felt, etc. and how I would achieve that on set. Based on that I was selected to direct a single episode, episode two, which was more than enough work,” said Carter.

“Instead of working with small groups of four or five people, you’re working with 20. It’s a great opportunity for leadership, and I just enjoyed the whole experience.”

Some of Carter’s favorite moments as a director for his episode were watching other actors come together and hit their marks to reenact his vision of the scene.

However, there were also some moments where he struggled to recognize this vision as well as schedule and organize shots for certain scenes.

“We were often faced with locations that didn’t cooperate with us, schedule changes where originally we weren’t supposed to be filming and now we have a few hours to plan how to film a scene that we only get one chance to film,” Carter said.

“I think the biggest struggle is just getting 15 people to believe in a single vision and trust in what you’re doing and knowing the work that you do behind the scenes goes un-thanked.

Writing and production classes offer real television experiences for students, and the Department of Communication has a good relationship with the TV studio as well, said Nelson.

Nelson encourages students to attend the screening and support their peers.

“It’s a story produced by students who are passionate about it,” he said. “It’s bigger than the program; it’s something that presents our school.”

Students can attend the premiere at 7:30 p.m. Past seasons can be found on YouTube.