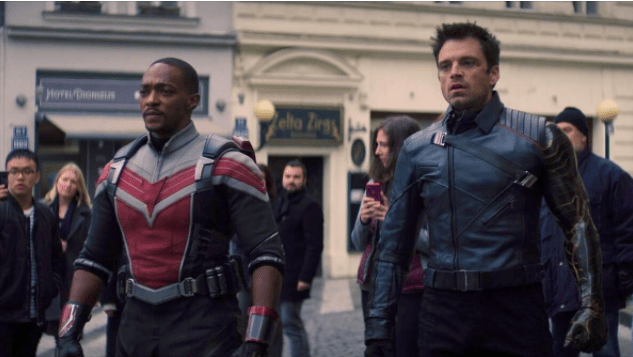 Capitalism, one-world order, racism, ends justifying the means, inherited legacies, nationalism and redemption are all major themes that “The Falcon and the Winter Soldier” raises in its six-part mini-series.

While these topics are powerful and deserve time and attention from Hollywood, the series took on more than it could handle. By the end, the audience is forced to accept a solution that doesn’t have the powerful and meaningful rendering we’re looking for.

“The Falcon and the Winter Soldier” ran on Disney+ from March 19 to April 23, with each episode lasting roughly 50 minutes.

The story picks up shortly after where “Avengers: Endgame” finished — a world where half the population is restored but a world that no longer has Iron Man or Captain America.

Inheriting the legacy of his best friend, Sam Wilson (Anthony Mackie) rejects the shield, surrendering it to the Captain America museum.

The whole act seems off. Why surrender the shield? Why not take up the legacy when your best friend asks you to?

The series continues, revealing why taking up the shield was so problematic for Sam — the racism and flawed legacy of America standing for freedom while persecuting its own.

This theme is powerful and culminates in the revealing of Isaiah Bradley (Carl Lumbly) — a super soldier who was imprisoned and experimented on for being Black. It critiques Marvel itself by declaring, “Why was the Captain of America a blonde-haired, blue-eyed white guy? Why is this the symbol of the U.S.?”

This theme is probably the only one that has some semblance of closure. Sam finally becomes the next Captain America after the previous Captain America, John Walker (Wyatt Russell), another blonde-haired, blue-eyed white guy, uses the shield to pummel a “Flag Smasher” — a member of the communist and antinationalist group that doesn’t want the national boundaries to be recreated — to death.

In contrast, Sam acknowledges the complicated history of the shield but decides to take up the mantle of Captain America, declaring that he has a right to represent and defend the U.S.

Beyond this theme, all the others fail to deliver.

One of the strengths of “The Falcon and the Winter Soldier” is also one of its failures. Karli Morgenthau (Erin Kellyman), super soldier and leader of the Flag Smashers, is an orphan-turned-mercenary from eastern Europe. She and her followers have seen how the world came together after half of the population vanished in “the Blip” and choose to fight for that comradery in the face of nationalism and capitalism.

In hopes to stop the GRC (Global Repatriation Council) from recreating national boundaries and giving power back to major companies and rich people, Karli plans to kidnap the senators after orchestrating many attacks against the organization and attempting to kill John Walker. The Flag Smashers are a desperate group, willing to do anything to keep the world as a communal entity that fights for the poor and destitute of the world.

This powerful villain is easy to love. She’s the Robin Hood of the new world, and the only criticism the audience is really given is that her means for unifying the world are not justified. But Sam and Bucky Barnes (Sebastian Stan) literally do the same thing — they create a riot in a prison to free Helmut Zemo (Daniel Brühl), an old enemy, to help them beat the new enemy.

Karli truly has an amazing cause, and it’s hard to root against her. The themes of ends failing to justify the means, nationalism, one-world-order and capitalism are all lost without a real victor, forcing the audience to simply accept that the world should return to normal because it should.

Despite taking on too many themes for a six-part mini-series, the show does a great job of creating characters you love and complicating the Captain America narrative, and the powerful symbolism scattered throughout is impossible to ignore.

The banter between Sam and Bucky drives the relief of the show. Their push-and-pull relationship, bordering on romantic with their spats and tiffs, draws in the audience. Their chemistry makes them easily likable.

Introducing Isaiah Bradley as a forerunner of Captain America that was imprisoned and tortured for doing the exact same thing as a white man makes the “noble image” of Captain America more complicated and difficult. This is a powerful move that the writers made, especially in a U.S. that continues to face racism and white supremacy.

Finally, the symbolism that is woven throughout the show is compelling. The climax of this symbolism is a bloodied Captain America shield. The U.S., often portrayed as the savior of the world, has bludgeoned the innocent out of rage and revenge. John lets his selfishness and passion distort and poison the image of the U.S.

Because of these features, the failed delivery of multiple themes is forgiven. The most powerful proof that this is the case is that theme is everything to me. My favorite films of all time are not the ones with the best acting or writing — they are the ones that rocked me with an important theme. I loved this series and went back to watch everything Captain America, now with a critical lens that “The Falcon and the Winter Soldier” gave me as the credits rolled.

“The Falcon and the Winter Soldier” can be streamed on Disney+.

2021-05-03
Previous Post: Skin Cancer Awareness Month: what you need to know
Next Post: Top five picks for breweries this summer