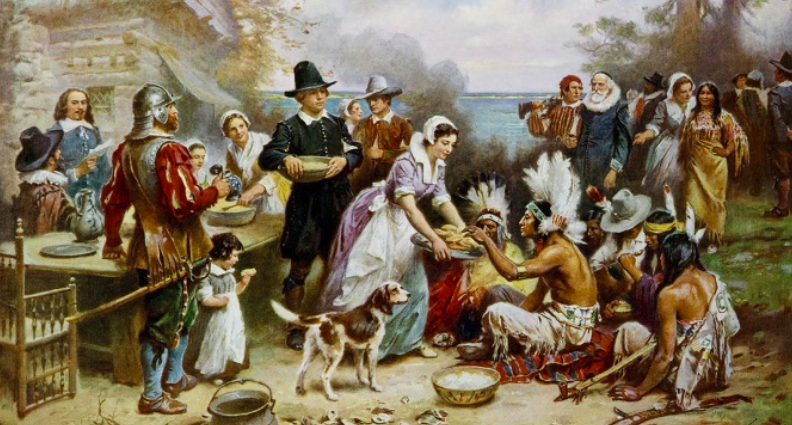 The truth about Thanksgiving

Ah, the American legend of Thanksgiving! The customary day of giving thanks, overindulging and watching football. We can always expect it to fall on the fourth Thursday of November. We look forward to turkey dinners with stuffing and mashed potatoes and the Macy’s Day Thanksgiving Parade.

Thanks to our K-12 education, we know the abridged story of the pilgrims and Native Americans’ important “first” feast. However, there is a lot that you might not know about the festival of plenty, and what you do know could be wrong.

Did the Mayflower bring the settlers over to the New World in 1620, where they established the Plymouth Colony? Yes, but that was more of an accident.

According to History, the settlers were supposed to land in Virginia, but they ended up at the Plymouth Rock in Plymouth, Massachusetts, which was originally occupied by Native Americans who had since been wiped out due to an unknown epidemic. The settlers literally pillaged graves and ruins.

Not so friendly relations

And did these misplaced settlers host a three-day celebration for a successful harvest in 1621, which members of the Wampanoag tribe attended? Well, sort of.

According to an article by the New York Times, one of the most common misconceptions is that the settlers extended an invitation to the Native Americans for helping them reap the harvest. In reality, we do not know for certain how they ended up feasting together.

History textbooks’ coverage of the first Thanksgiving has also seemingly skipped over the bit about the deadly conflict between the Wampanoag and the English years later. Tensions between the two groups rose as the English tried to take control of the already established land and trading systems. All this boiled over into the Pequot War.

New Englanders in the 1830s were the first to label this event “the first Thanksgiving,” but this was not the first feast of its kind.

An article by Business Insider states that a number of localities have vied to claim the first Thanksgiving for themselves. First Thanksgiving claims date back to the 1500s, so who can say for sure?

Thanksgiving was not always an important historical event

Sarah Josepha Hale, the editor of Godey’s Lady’s Book — a popular women’s periodical published during the mid-19th century — is known as the “Mother of Thanksgiving.” Hale often wrote editorials and articles about her visions for the holiday in her magazine.

She lobbied state and federal officials to pass legislation, creating a fixed, national day of thanks on the last Thursday of November, according to History, because she believed that such a unifying measure would ease divisions between the North and South. Her efforts paid off.

Thanksgiving became a national holiday when President Abraham Lincoln declared it as such, during the Civil War.

And sorry to burst your bubble, but there is also no evidence that turkey was served at the first Thanksgiving dinner. Possible wild fowl, like goose or duck, plus the venison that was brought by the Wampanoag were served.

It is more likely that none of today’s Thanksgiving fixings were on the settlers’ table, meaning no pie either!

According to the New York Times’ article mentioned above, the settlers lacked butter and wheat flour for a crust, and they had no oven for baking. What is known is that the settlers harvested crops, so they probably feasted on pumpkin, corn and cranberries.

Whether you are celebrating Thanksgiving this year with friends and family, or you have other plans, at least now you have something other than politics to discuss over the dinner table.