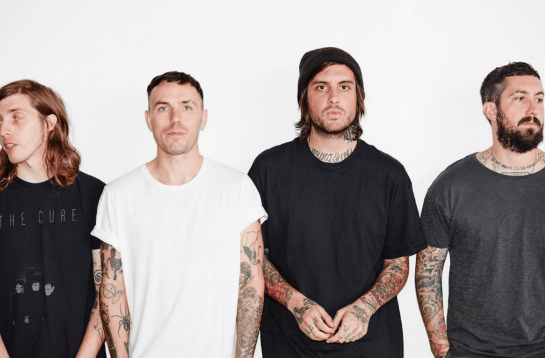 Like a mermaid falling into a black hole, the sound the of the shoegaze-pop genre is always a sound you can’t quite put your finger on, but definitely something to experience at least once in a listener’s lifetime.

Rock critics who refuse to jump into this subgenre of alternative rock are either eliminating their chances of getting tinnitus or would just rather be listening to something more uplifting.

If either of these pleasant elements of music are up your alley then the very appealing, hard-hitting unlucky shogaze rock band Nothing, is for you.

From fighting off a pack of muggers after a show in Oakland that left lead singer, Domenic Palermo, with permanent damage to the brain and a reattached ear, to accidentally signing their sophomore record “Tired of Tomorrow” with Martian Shkrelis record label, Collect Records, the man who most notably jacked up the prices of Daraprim, a drug commonly used by AIDS patients, the Philadelphia shoegaze outfit Nothing is considered to be the unluckiest band in the world.

Nothing, the four-piece shoegaze pop project released their fourth record “Dance on the Blacktop” on Aug. 24th with producer John Agnello.

“Dance on the Blacktop” is an album that numbs the bands misfortunes away by infusing their sound with a nitrous oxide effect.

Caked in reverb and shy as all can be the very brevity of Nothings downright depressing lyrics is as open as one can be without giving too much away for listeners to infer.

“Dear Cambria\You’re floating up the stream/ She asked, Would you sink with me?” Palermo sings in the second song of the record “Blue Line Baby.” A song that Palermo said in a Pitchfork interview ”Wrote about a girl [he] knew who OD’d when she was 13.”

The melancholy hour and some change spent with Nothing is not red with rage, but melodically pleasing to the ear.

Acceptance when life takes an unexpected turn and falls apart fast is the motif that Nothing embraces outwardly.

Fearlessly contradicting the very nature of aggressively loud rock music with whispering vocals, taking the childhood phrase, just deal with it, to a literal sense.

Nothing flirts with their anxieties and picks the mind of the happy go lucky radio friendly listener – with lyrics booklet in band and hopefully a strong hankering for stray eyed post rock Nothing will deliver tough and cheek aspects about the human condition.

Like a more mature version of My Chemical Romance, Nothing refuses to display over the top visuals about snakes, vampires and blood to lore visitors in.

Because in most horror movies the things that are found to be the most haunting are aspects about the story that we aren’t expecting. Nothing embraces this perfectly.

2018-09-25
Previous Post: Spooky Podcasts to Watch Out for This October
Next Post: You See CS: Garden of the Gods