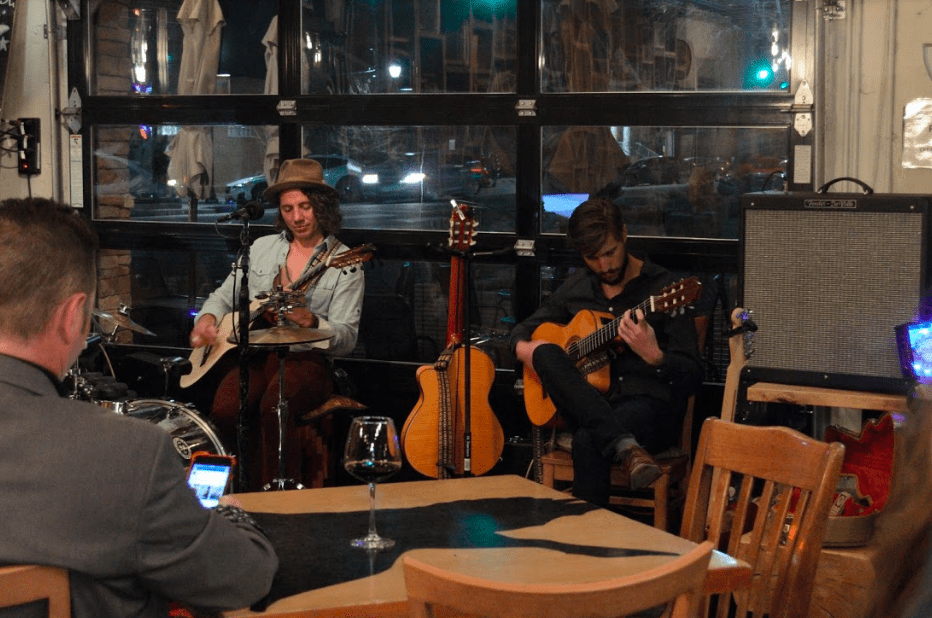 By: Logan Davel
In: Culture, You See CS

The nightlife of Colorado Springs is recognized by many noticeable venues. Foremost is the Wild Goose Meeting House, which sits snugly on the corner of North Tejon and East Boulder. Despite being close to the end of what is considered to be main street, there is no lack of activity that surrounds this particular coffee shop.

Several distinct features become immediately apparent as I settled into my place in the corner. The first was the towering bookshelves that hugged the far wall, displaying a quaint selection of books. Ranging from cookbooks to thick fantasy novels, it created a homely feel within the small space.

It was also interesting to see that two cargo doors opened directly onto the intersection sidewalk. While they did not have them open due to a stiff wind present that afternoon, I was told by a barista that the doors were opened often in the summer to allow cool summer air to flow through the main area.

The one aspect that really caught my attention, however, was the many Edison light bulbs that shone from the ceiling or hung from thick wires above wooden tables.

This feature alone, though not necessarily novel, lended itself to a distinct character in the place. The old-fashioned bulbs cast a soft orange glow upon everything in the coffee shop, resulting in an antiquated feel.

I found that the aesthetic also lended itself to no specific selection of customer.

People were just as likely to be involved in a lively conversation as they were to sit quietly and read or write. Families ate dinner while friends drank beer, dispelling the idea that The Wild Goose was specific to just one demographic. The result was a location that was both calm and alive, both energetic and reserved.

The part of the Wild Goose that I appreciated the most was the coffee.

Despite being somewhat colder than I felt necessary, it was rich with flavor. As such, the lower temperature should not be discounted outright by coffee enthusiasts.

My first coffee was a simple latte. Despite being slightly washed out with milk, it offered a surprisingly strong flavor with hints of sweetness and vanilla. The lack of acidity could most likely be attributed to the slightly excessive amount of milk used, however it was pleasant enough. The floral latte art was a nice touch as well.

My second drink was a cortado. The flavor difference was immediately apparent. Despite suffering from a similar milk overuse as the latte, the flavor was not lost. The drink offered exceptional sweetness with only marginal acidity. Similar to the latte, it was surprisingly smooth, and I found myself finishing it very quickly.

My final drink was a macchiato. This drink came with a nice addition of a cup of tonic water to clean the palate after each sip, something that I counted as a nice touch, which coffee shops do not often do.

There was significantly less milk in this drink than I had experienced before. What little milk was added had been extensively frothed, allowing for a sweet layer of foam on top with the stronger espresso underneath.

The foam was much sweeter than traditional steamed milk, creating a nice mix of espresso and foam with each sip. Despite drinking essentially espresso, the acidity was not apparent due to the foam. Regardless of whether this was intended, it was a nice result. This was my favorite drink of the evening as it was not overburdened by milk and offered some of the better qualities of the coffee used.

My final remarks are very positive for this place.

The location holds a pleasant place for both study and conversation, a token location near UCCS. The coffee, despite suffering in temperature, is pleasant and smooth. Their baristas are skilled, fast and often enthusiastic in answering questions. My advice would be to make this place a regular stop in your daily adventures, though you should definitely tack ‘extra hot’ on any drink order.