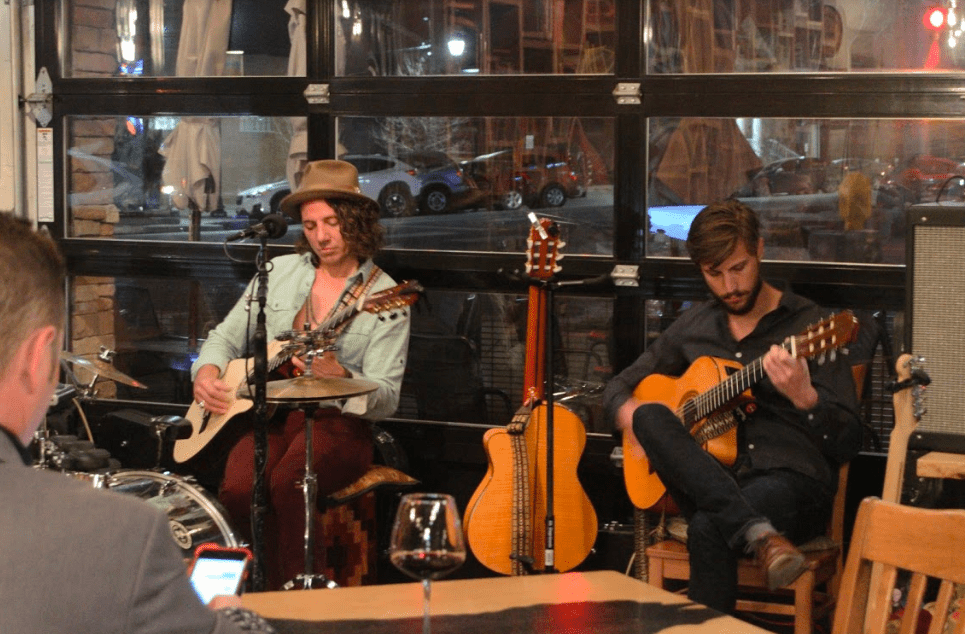 By: Eric Friedberg
In: Features, You See CS

“We are less than 48 hours out of Cuba,” said the Colorado Springs local Ryan Flores and his band on Friday night at The Wild Goose Meeting House.

If you misunderstood that sentence and thought that the band’s name was “Less than 48 hours out of Cuba,” you would not be entirely far off the mark.

Playing acoustic Latin Jazz, Flores and his band, consisting of a drummer, lead guitarist and Flores himself taking on rhythm acoustic guitar, it would be fair to say that all coffee and beer drinkers had their attention on the music that night.

The Wild Goose Meeting house is located on 401 N. Tejon St. The small coffee shop shop also sells beer toward the back of the bar and frequently invites artists to play music on weekend nights.

It is hard to imagine the volume of a full drum set filling up a small space like the Wild Goose. A few chairs might have been moved around to give Flores and his band some breathing room that night, but that’s it.

Under the live music and events tab on the Wild Goose Meeting House website was the description of what Flores would bring sonically to the table that night.

“An Eclectic, latin, gypsy acoustic musical magic.” Whether this was Flores’s doing or just some witty concert promoter – it sure was gypsy house music being put to the test by three knowledgeable jazz musicians here in Colorado Springs.

A set of electric bongos was attached to Flores’ hip for the entirety of the set while also taking the term rhythm guitar to a whole new level.

Far exceeding the expectations of the percussive skillset of the guy who likes to play “Wonderwall” by Oasis at house parties.

Flores uses the palms of his hands and the hollow body of his acoustic instrument as a percussive tool.

The show that night was Flores’s returning show to his hometown of Colorado Springs from Havana, Cuba.

The middle ground that Flores and his band finds between music associated with Latin America music and the basic roots of jazz is a perfect blend that is easy to digest.

The band and genre of music might be something any average listener of music has not heard before.

With a fierce hunger for rhythm and melody, the three musicians all shared the rhythm section for a time or two during their set.

It was as if the term gypsy house coffee music had one two many IPAs that night and decided to speed up the tempo and tag team in new elements of Latin Jazz into the equation.

The history of Latin music is being reconstructed and made new again by Flores and his group, hopefully into a more popular sounding coffee house band.

Most coffee house bands are bound to play some covers, being as a quiet as they can be without stopping conversation from happening around them and usually stick to less experimentation.

Flores and his band that plays at The Wild goose Meeting House frequently, they try to break these genre-defining boundaries.

It is great to have an eclectic, established band in the Springs like Flores” that allows us to listen to new types of music that do not get played on the radio or featured in any top 10 greatest hits playlist we get force fed in our daily lives.

Going out to DIY shows, hole-in-the-wall bars, intimate venues and apparently gourmet coffee shops by the name of Wild Goose Meeting House should mix things up.