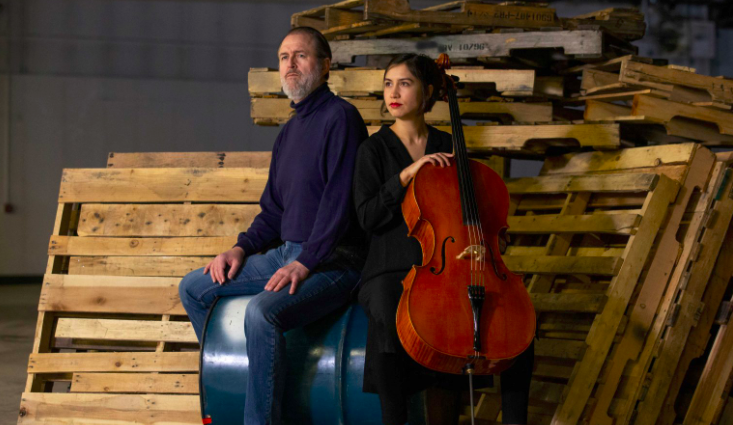 Theatreworks returns: ‘An Illiad’ to open May 7 at the Ent Center

After being shut down unexpectedly last March, Max Shulman’s production of “An Iliad” is returning to Theatreworks on May 7 for the viewing pleasure of UCCS students, faculty, staff and the surrounding community.

“An Iliad” was originally scheduled to open in March 2020 but was closed on its opening night due to the COVID-19 pandemic. Since then, the show’s director, Max Shulman, the cast, and the artistic team behind “An Iliad” have put months of work into this show to get it up and running again.

Shulman expressed how the delay in the performance has affected the cast and crew involved in the production.

“It has been a lot of learning how to be patient because of how everything is so up in the air,” he said. “Normally a lot of the decisions we are making right now are decisions we would’ve made months ago.”

He also noted that everyone who is making those decisions had to learn how to be “nimble” and “flexible” given the circumstances. Last March, rehearsal lasted about three weeks, but this semester, rehearsal only lasted one week.

Theatreworks is not the only performing arts company affected by the pandemic. According to Shulman, only a handful of theaters are doing any shows at the moment, and Theatreworks will be one of the first of these companies to do so.

“An Iliad” is a two-person show, meaning only two people are on stage throughout the entirety of the performance: the mysterious poet accompanied by a muse, who is a cellist in this version of the production. But there is still a lot of work that the crew has to put into the production, due to the introduction of extra COVID-19 safety measures.

With a runtime of around an hour and forty minutes, “An Iliad” is the story of a mysterious poet who returns to an unspecified, ambiguous place and proceeds to tell the audience the story of the Trojan War. This poet seemingly knows about every war that has ever happened throughout history and it is as though he witnessed the Trojan War himself.

At the start of the show, the poet admits that he is forced to tell the story of the Trojan War because of humanity’s continuing rage and thirst for war.

It is important to keep in mind that while “An Iliad” is inspired by Homer’s “The Iliad,” they are not the same stories. According to the Ent Center’s website, “An Iliad” is a show that “brings us to the battleﬁeld where gods, heroes, and empires clash in a quest for vengeance and glory—an age-old story reinvented for our modern era.”

Performances of “An Iliad” will be held in a designated outdoor area at the Ent Center with a socially distanced audience. Each show will seat about 100 people and tickets will be limited. As a friendly reminder, UCCS students have access to free tickets for all Theatreworks shows, and tickets can be reserved online or over the phone at the box office. Tickets are not available yet, but they will go on sale soon.

Shulman also explained what the return to the theater has been like and how “An Iliad” is relevant to the context of today.

He said, “Being in the theatre is like being alive again, it’s like breathing again. ‘An Iliad’ is one long act of the mourning of the those who came before us. Homer’s ‘The Iliad’ is about the death of Hector, while this play is about people mourning loss, surrounded with pain, devastation, and overwhelmed by everything that has happened to them.”

The past year has undoubtably been a chaotic and rough year for many people for a variety of different reasons.

Shulman said, “You do a play for what it means right now.” This performance comes at a good time for the audience to, as Shulman added, “reflect upon the losses we have had, to recognize this has happened again and again, and to have a communal mourning.”

Perhaps most importantly, Shulman regarded one of the lessons of “An Iliad” as being that “We carry on and find ways to heal — something we have been doing over 2000 years.”

On a final note, Shulman added that UCCS Presents and Theaterworks is planning for a whole season after this.

Opening weekend for “An Iliad” is also significant for the Ent Center because there are several other events happening that weekend.

“Medea” is another Greek tragedy show that is opening that weekend and will also be socially distanced. The VAPA Arts Festival, including several forms of performance such as dance, art and sculpture, is also happening over the same weekend. For those interested in a more cinematic experience, the UCCS Student Film Festival will occur during the weekend of May 6 as well.

“The Iliad” will run for three weeks from opening night until May 23, with evening performances every Thursday – Sunday and a few matinees on certain Saturdays at the Ent Center for the Arts.

See the Ent Center for the Arts website for more information.